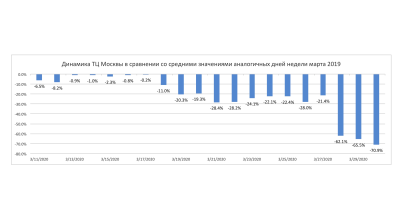 Foot traffic at Russia's leading malls has collapsed by 70% y/y in the last few days, according to the latest Watcom Shopping index numbers
By Ben Aris in Berlin April 2, 2020

As bne IntelliNews reported last week, 2020 had got off to a good start, with the index holding up and matching last year’s performance despite the traditional dip following the May 8 International Women’s Day holiday – Eastern Europe’s answer to St Valentine’s Day.

However, as the chart shows, malls have lost some of their appeal in the last two years thanks to the increasing volume of online shopping that now makes up 4.5% of the total, a trend towards doing more shopping in smaller, but more local malls in residential areas, and the six-year stagnation of real incomes.

But the Watcom results for the last few months represent a collapse from previous patterns as the waves of crisis began to break over the economy.

The problems started on March 6 when Russia withdrew from the OPEC+ oil production cut deal that sent the price of oil crashing, dragging the value of the ruble down with it from RUB62 to the dollar in February to a low of RUB80 in the last few weeks. In the face of a crisis Russian consumers typically cut back on spending and begin to save, depressing retail turnover in a crisis.

But things changed dramatically on March 30 when Sobyanin put the entire capital on a stringent lockdown, banning residents from leaving their appartments for any reason other than a few essential trips outside. Moreover, shopping at anywhere other than a local “produkty” further than 100mn from home is now banned.

Watcom’s figures show the crisis building as Muscovites became increasingly concerned about the spread of coronavirus (COVID-19) virus that took off in the week starting March 7, when there was only seven officially confirmed cases, and accelerating rapidly after March 20.

The traffic in the malls began to fall sharply at the same time, dropping by 11% on March 18th and 20% on March 19, but only really crashing after the lockdown was imposed this week. Traffic was down 70.9% on March 30, while the infection rate had soared to 1,836 cases the same day, almost all of which are in the capital. Two days later and the number of officially recorded cases has leaped to 2,337 as of April 1.

The pandemic will hurt retail sales badly this year, which had started to recover after real income growth turned positive in the fourth quarter of 2019 after years of stagnation, partly thanks to the acceleration of spending on the 12 national projects at the end of last year. Retail turnover was up 4.7% by February, according to Rosstat, but can be expected to tank when the March numbers are released. Real wage growth will also be hit, which expanded by 6.9% in December and was up 4.2% in February y/y, the last data available.

Stuck indoors, Russians have turned to the burgeoning e-commerce sites, and online stores were quickly overwhelmed with the volume of orders. Regular users of these services report that most companies were already moving to same-day delivery and Yandex had even launched a service that guarantees delivery within 15mins earlier this year. But as the virus spread delivery dates have been pushed out to several days and many of the items ordered, such as toilet paper, are sold out by the time for the delivery comes around.

Many retail outlets have simply closed down for the duration of the lockdown, while food retailers, children’s goods stores, pet food, pharmacies, telecommunications outlets and other shops selling essential goods and services remain open. Restaurants are working, but only on a home-delivery basis (another service provided by Yandex amongst others).

“Our core focus is now on the ultimate timing of social distancing measures and their impact on consumer budgets (which currently points to a significant slowdown in the short term). We anticipate cost optimisation initiatives, from hiring freezers to wage adjustments and the renegotiation of rent contracts, while government support is also vital,” VTB Capital (VTBC) said in a note.

“Last year, e-grocery was only RUB45bn and 0.3% of food retail (that is only a sixth of the level in developed markets). The current situation removes one of the prime hurdles in the area of service promotion and is set to speed up the segment across all niches (stock up and express delivery) while pushing offline retailers to join the e-commerce race,” VTBC said.

As bne IntelliNews  reported, the pandemic will be a boon to e-retailers across the entire region as those who were reluctant to use these services until now are forced to use them. While e-commerce has been growing quickly in the region, the share of online services in the overall retail turnover has been lagging that of the West. The coronavirus pandemic will go some way to closing the gap.

Most of the leading supermarket chains and retailers had already targeted online delivery as a growth area, but the crisis will only catalyse this trend. X5 Retail Group targets leadership across e-grocery this year with its flagship Perekrestok.ru supermarket chain.

“It has been rolling out express delivery from convenience outlets since January and joined technology companies Samokat and Yandex.Lavka in the segment, which we think offers prime growth opportunities,” VTBC said in a note.

MOSCOW BLOG: Russia’s rebound becomes visible as the ruble breaks below RUB70 to the dollar

Foot traffic at Russia’s leading malls jumps as rebound gets underway
MOSCOW BLOG: Russia’s rebound becomes visible as the ruble breaks below RUB70 to the dollar
Russia's services PMI bounces back to 35.9 in May from a record low of 12.9% in April, but business still contracting

Foot traffic at Russia’s leading malls jumps as rebound gets underway
11 hours ago
Armenia’s coronavirus plight worsens with more than 1,000 more infections in two days
21 hours ago
Authorities “may be sowing seeds of Turkish economy’s downfall” by pumping money at fastest rate for more than decade
22 hours ago
Turkey’s electricity consumption collapses 17% in May
2 days ago
Russian government presents National Recovery Plan to President Putin
2 days ago