Western Balkans' climate to resemble US Deep South’s by 2050 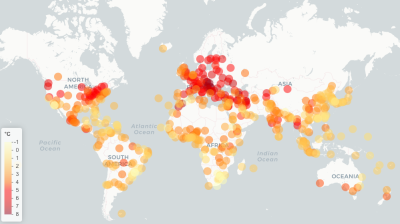 Cities in Southeast Europe will see some of the sharpest increases in average temperatures of any major urban areas worldwide, according to a new study.

The study, published by Zurich-based Crowther Lab, looks at shifts in climate conditions in 520 of the world’s major cities as a result of climate change. The authors aim to help people visualise the tangible effects of climate change by forecasting which cities today’s urban centres will resemble by 2050; in almost all cases a hike in temperatures is expected, sometimes by as much as 7-8C.

“Our analysis revealed that over 77% of the world’s cities are likely to experience a shift towards the climate conditions of another major city by 2050, while 22% [mainly in equatorial regions] will shift to climate conditions that are not currently present for any major cities on the planet,” says the paper.

The Slovenian capital Ljubljana is forecast to see the greatest increase in the maximum temperature of its warmest month — 8C — of any of the large cities and administrative centres studied. This will send its mean annual temperature up by 3.5C, giving it a similar climate to Virginia Beach.

Other cities in the Western Balkans are forecast to see similarly extreme temperatures increases in the next 31 years.

Two Bosnian cities, Sarajevo and Banja Luka, will also have climates similar to that of Dallas following increases in the maximum temperatures of their warmest months of 6.8C and 7.4C respectively.

The Albanian capital Tirana is projected to experience a smaller increase in its maximum temperature of 3.5C, while its mean annual temperature will rise by 1.9C, but this will still be enough to give it a climate more like San Antonio’s.

Strong increases in temperature are also anticipated in the Caucasus and Central Asia. Dushanbe and Tashkent will see the steepest increases in temperatures of their coldest months of the year, by 7.8C and 6.8C respectively, and will both end up with a climate more like Irbil, Iraq. The Armenian capital Yerevan is also set to see considerable warming in the next three decades.

Among other major cities studied, the researchers predict that “Madrid’s climate in 2050 will resemble Marrakech’s climate today, Stockholm will resemble Budapest, London — Barcelona, and Moscow — Sofia.

For much of the world, at least the northern hemisphere, the expectation is that cities will grow considerably hotter. However, it is a different picture in the tropical regions, which are expected to experience smaller changes in average temperature, while shifts in rainfall patterns will be more important than temperature.

“At the global scale, our study reveals that geographical shifts tend to converge towards the subtropics, going to warmer climate conditions from boreal and temperate regions and to drier conditions from tropical regions,” says the report.

“With more severe droughts, tropical cities will move towards the subtropics, i.e. towards drier climates. However, the fate of major tropical cities remains highly uncertain, because many tropical regions will experience unprecedented climate conditions.”

Tens of thousands gather to demand the resignation of Prime Minister Boyko Borissov and chief prosecutor Ivan Gechev, accusing them of corruption and dependence on criminal groups.

Radev takes on Bulgarian government and chief prosecutor after raid on presidential offices. Protesters demand resignation of politicians they say are completely dependent on corrupt businessmen.

Confidence in the Z-Dream of rapid, deep and far-reaching reforms by Ukrainian President Volodymyr Zelenskiy that will transform Ukraine almost totally evaporated this week.