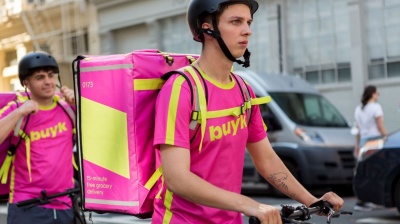 The hot new thing in e-commerce is ultrafast delivery where your order arrives in 10 mins or less. But it is the emerging market players that are growing this business at the fastest rate. / wiki
By Stephen Bierman of NEO September 2, 2021

​​Competition between ultrafast grocery delivery services is intensifying in Western capitals, with emerging market players looking set to dominate as a crop of ambitious entrepreneurs, all eager to become the next unicorn, bring their expertise to developed markets.

The last 18 months has seen e-commerce skyrocket in popularity as national lockdowns shuttered stores and accelerated a shift online. With people now accustomed to purchasing everything from their daily shop to workout equipment digitally, the race is shifting to the last mile and getting goods in consumers' hands as fast as possible.

This transition has sparked the rise of ultrafast grocery delivery services, which promise to deliver popular goods within as little as 10 minutes of ordering and have become the latest stage in a wave of venture-capital backed startups aimed at making our lives easier and more convenient than ever before.

Demand has been so hot for these services in 2021 that recent funding rounds have seen several players rake in valuations north of $1bn. The market is only set to gain further momentum going forward, according to a July 7 note from JP Morgan Global Equity Research.

“Ultrafast delivery takes the convenience segment to another level…and cohort developments suggest customers are loyal and sticky to the new services”, writes the note, arguing that greater awareness of these services could result in shorter order patterns and a shift away from the traditional weekly shop.

Companies achieve such startlingly rapid delivery times by operating “dark stores” – little warehouses designed to service consumers within a few kilometres’ radius, which they stock with a few thousand of the most popular consumer goods deliverable by bike.

Looking at the market in Western capitals right now, it is evident that some of the largest and most successful of these players have hailed not from London or New York, but rather emerging markets, and most notably Turkey and Russia.

In Europe, Getir is certainly one of these. The company, founded in Istanbul back in 2015, has pursued a rapid expansion plan that has seen it launch in several UK cities, as well as Amsterdam, Berlin and most recently Paris. Hype around the company has climbed so high this year that the company saw the value of its business grow from $2.6bn to $7.5bn within the space of just three months.

Yandex Lavka also made its first foray outside its native Russia last November, with its launch in Tel Aviv under the Yango Deli brand. After seeing demand swell for its 15-minute grocery delivery service this year both in Israel and back home, the company officially launched in Paris last week and has announced plans to expand into London later this year.

Yandex Lavka has expanded to both Israel and Paris, and will seek to break into the London market later this year.

Across the pond, ultrafast delivery startups with Russian founders have been even more dominant. Out of the handful of businesses currently operating stateside, four of the largest have Russian founders, including Fridge No More, 1520, Buyk and Food Rocket.

So is there something in the water in Russia?

While these services seem relatively new in the West, they have been operating successfully in Russia for a few years now. Yandex launched its ultrafast grocery delivery service Yandex.Lavka back in 2019, while Samokat began its ultrafast delivery operations in St. Petersburg three years ago. The latter now boasts the highest number of dark stores out of any service operating in Europe and the United States, with over 700 stores and having launched 323 new stores since April alone, according to Forbes. This places the company ahead even of Getir, which had about 500 warehouses in Turkey and 28 darkstores in London as of early June.

Not only does this mean that Russian entrepreneurs are perhaps more familiar with the concept of rapid grocery delivery, but it also means that they already have a wealth of experience trying and testing out the business model, which gives them a competitive advantage over their peers in Western markets. Even those founders entering Western markets who have not directly founded similar services in Russia have often worked high up in companies that have. The founders of 1520, for example, both worked at Yandex prior to branching out on their own and helped launch the first three speedy grocery stores for that company.

In Turkey this has also been the case. Getir helped pioneer the entire concept of ultrafast delivery, spending five and a half years trying and testing a variety of delivery methods to meet its promise of delivery within 10 minutes. Before settling on their visually striking purple bikes, the company had also tried – unsuccessfully – to keep its stock in vans that were constantly on the move around the city. Experiments like these have afforded Getir a depth of knowledge of what works, and what doesn’t, that newer players will struggle to match.

Just as importantly, their experience has given them time to fine-tune their technology. The time pressure and limited assortment of the ultrafast grocery delivery segment means a company’s technology can play a vital role in its success, facilitating everything from correct inventory display (to ensure out of stock items do not mistakenly appear as available) to a hyper-tailored assortment that aligns with specific neighbourhood demand.

The founders of US start-up Buyk, for example, spent three years’ developing this technology during their time running Samokat, and are confident that the insights they gained from this experience give them an edge on their peers in New York.

In a sector with typically low margins, prior experience is also hugely beneficial in helping companies achieve profitability. Buyk’s founders are among the very few in the sector with a track record of delivering profits. Through their experience at Samokat, they understand that a large private label assortment is key to boosting customer retention and facilitating higher margins, and can use insights like these to bolster Buyk’s success.

“We at CM Ventures have been watching this space closely and considered investments in several of the emerging players. In the end, we bet on Buyk, as it is literally one of only two teams globally that have created sizeable ultrafast grocery delivery businesses,” said Vagan Khranyan, founding partner at CM Ventures. “Of all the new market entrants, the ones to survive will be those that can combine technology with solid operational experience in retail. We see that the Buyk founders are capable of this.”

With everything still to play for in this nascent market, it remains too early to tell who will emerge on top, but with these advantages behind them, emerging market players have all the chances of capturing significant market share.

This article first appeared in New Economy Observer (NEO), a digital publication covering the intersection between finance and social responsibility, with a special focus on emerging markets. IT offers news and analysis on major issues shaping the new global economy, including climate change and renewable energy, sustainable development, e-commerce and tech innovation, and the future of work.