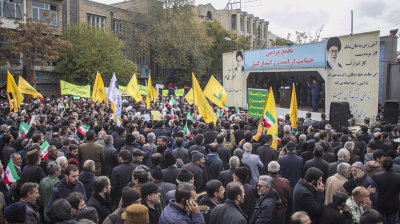 Official Iranian news agency Mehr on November 19 put out pictures of a rally in Tabriz which it claimed was called to condemn rioters in Iran and support the Islamic Republic. Mehr's owner is the Islamic Ideology Dissemination Organization (IIDO).
By bne IntelliNews November 19, 2019

Iranian government spokesperson Ali Rabiei has said that Iran will be reconnected to the internet once the protests sparked by the sudden big rise in petrol prices have subsided, Entekhab.ir reported on November 19.

Meanwhile, the Office of the UN High Commissioner for Human Rights has urged Tehran to restore internet services while stating that it is "especially alarmed that the use of live ammunition has allegedly caused a significant number of deaths across the country". Spokesman for the Office, Rupert Colville, said the extent of casualties across at least eight provinces was "clearly very serious", adding that “such protests are an indication of deep-rooted grievances that cannot simply be brushed aside”.

BBC Persian Service’s Kasra Naji said there were reports that some 200 people have died amid the nationwide demonstrations that in many cases grew into anti-regime protests. BBC Monitoring, however, has taken a more cautious line. It has suggested that information coming out of the country cannot be verified and thus there is no way of coming to an exact figure on the number of fatalities. Amnesty International, on the other hand, said it had confirmed more than 100 fatalities. Iranian officials have so far reported 12 deaths. Late on November 18, the semi-official ISNA and Fars news agencies reported that three members of the security forces were stabbed to death by "rioters" near Tehran.

Islamic Republic of Iran Broadcasting’s (IRIB’s) Radio Iran service has praised the taking down of the internet in the country, saying "it has denied foreign media outlets content" with which to stir up more anti-regime sentiment.

Brian Hook, Washington’s special envoy for Iran, told RFE/RL's Radio Farda that the US was working to help Iranians bypass the internet outage. "We think that's going to help some people connect to the internet so that they can continue getting out their videos [of the protests]," Hook said. The US was providing Iranians with “workarounds”, he added. 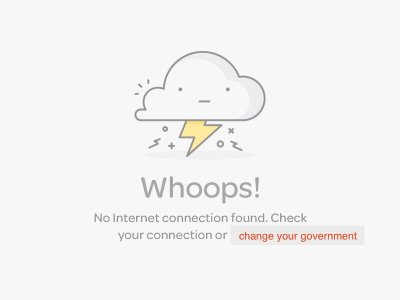 Some reaction to the crisis response posted on Twitter.

Hardline Kayhan newspaper has reported that the judiciary was considering "execution by hanging for the riot leaders a definite punishment". Its article did not provide more detail.

At the instigation of the Supreme National Security Council, officials started disconnecting the world wide web on November 15 after the first protests. Only select places remain connected including some universities, government offices and news agencies.

“If it's ascertained that it [the internet] will not be misused, the web in various provinces will gradually return,” government spokesman Rabiei said.

“Sixty-five hours after Iran implemented a near-total internet shutdown, some of the last remaining networks are now being cut and connectivity to the outside world has fallen further to 4 percent of normal levels,” NetBlocks, which monitors worldwide internet access, noted.

As far as can be ascertained from the poor information coming out of Iran, the unrest—that has led to the setting on fire of many petrol stations and banks as well as some municipal buildings—has gradually reduced in intensity but some anti-Islamic Republic outlets, including London-based Iran International, claimed riots were still occurring across the country.

The Iranian judiciary said it has rounded up several people accused of posting videos online through government internet connections in the past few days.

Rabiei made his comments on the sidelines of the opening of the International Education Management Seminar in Rural Areas in Tehran.  He said: “We’ve tried to solve the problems caused for businesses and banks in relation to the internet [blackout], but some university students and other sectors are still struggling.”

“Things have not been resolved yet and we understand their points of view, but people should also understand that there has been misuse of the internet,” he added.

Iran’s petrol prices remain among the lowest in the world, even with the prices jumping a minimum-50%, and in some cases by up to 300%, under the government’s edict. Officials say the extra revenue generated is to be used to alleviate hardship suffered by lower-income Iranians in the face of the crushing sanctions directed at the country by the US in the row over the 2015 nuclear deal. However, Iranians have gotten used to ultra-cheap fuel in their oil-rich country and, amid the misery so many are going through under what officials refer to as Washington’s “economic war”, any introduction of a petrol price hike was bound to stir feelings.