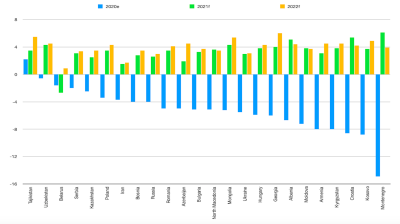 The World Bank expects that countries in the Europe and Central Asia region will achieve a modest recovery in 2021, with regional GDP growing by 3.3% this year after an estimated contraction of 2.9% in 2020.

However, the development bank warns in its latest Global Economic Prospects report released on January 5 of strong downside risks to the outlook due to the risk of a further surge in cases, which, in turn, has the potential to lead to a rise in social and geopolitical tensions. Globally, the recovery depends critically on the rollout of coronavirus vaccines, as well as on governments facilitating a re-investment cycle aimed at sustainable growth, the bank said.

“While the global economy appears to have entered a subdued recovery, policymakers face formidable challenges — in public health, debt management, budget policies, central banking and structural reforms — as they try to ensure that this still fragile global recovery gains traction and sets a foundation for robust growth,” commented World Bank Group president David Malpass on the launch of the report.

“To overcome the impacts of the pandemic and counter the investment headwind, there needs to be a major push to improve business environments, increase labour and product market flexibility, and strengthen transparency and governance.”

For the Europe and Central Asia region that comprises most countries from Central, Southeast and Eastern Europe and Eurasia, “the outlook is predicated on the distribution of an effective vaccine in early in 2021 in advanced economies and major emerging market and developing economies, including Russia, and later in the year for other countries. It also assumes that geopolitical tensions do not re-escalate in the region,” says the report.

New coronavirus cases already rose sharply in the final quarter of 2020 across most of the region, causing governments to keep restrictions in place and some to introduce second lockdowns.

The region’s GDP is estimated to have contracted by less than the global average of 4.3% in 2020, even though nearly all its economies went into recession and around two thirds are expected to contract by more than they did during the global financial crisis. However, the region’s projected expansion in 2021 is feebler than the 4% forecast for the global economy.

The latest forecast for the region indicates the contraction in 2020 was less severe than previously forecast; in June, the bank projected a 4.7% slump in GDP for 2020, followed by a recovery of 3.6% this year.

There are also strong variations between countries: “The economies hardest hit by the pandemic are those with strong trade or financial linkages to the euro area and those heavily dependent on services and tourism (Croatia, Kosovo, Montenegro),” the report said.

By contrast, according to the World Bank, three countries — Tajikistan, Turkey and Uzbekistan — appear to have escaped an economic contraction in 2020, expanding by an estimated 2.2%, 0.5% and 0.6% respectively in 2020. This growth will continue into 2021; Turkey’s economy, for example, “is projected to grow 4.5% in 2021 as a recovery in domestic demand takes hold and external demand picks up”.

The only economy expected to contract for a second straight year in 2021 is Belarus, as the ongoing mass unrest and brutal government crackdown take their toll on the economy. After GDP shrank by an estimated 1.6% in 2020, Belarus’ economic contraction will deepen to 2.7% in 2021, and it will achieve positive growth of a mere 0.9% the following year.

Meanwhile, almost none of the countries from the region will fully rebound from the 2020 coronavirus-induced recessions this year, the exceptions being Kazakhstan, Poland and Serbia, whose economies will grow by roughly the same amount this year as they shrank by in 2020. This is despite the fiscal support packages announced in almost all the region’s economies.

The World Bank forecasts growth in Russia will pick up to just 2.6%, noting that the country is dealing with a fresh acceleration in coronavirus infections. “Growth is expected to be supported by the rollout of a vaccine, a rise in industrial commodity prices, and continuation of supportive policy measures,” the report added. Growth in the rest of Eastern Europe will be lower at 1.3%, dragged down by Belarus’ performance.

Growth in Central Europe and the Western Balkans will be stronger at 3.6% and 3.5% respectively, the World Bank said. In Central Europe, the rebound will be supported by growth in trade as activity revives in the euro area, as well as by policy accommodation. In the Western Balkans, growth hinges on a restoration of consumer and business confidence as the pandemic is brought under control, as well as an easing in political instability.

GDP growth is expected to come in at 2.5% in the South Caucasus after both the pandemic and the eruption of the conflict between Armenia and Azerbaijan contributed to the contraction in 2020. This year’s expansion will be slightly stronger at 3% in Central Asa, supported by both rising commodity prices and foreign direct investment.