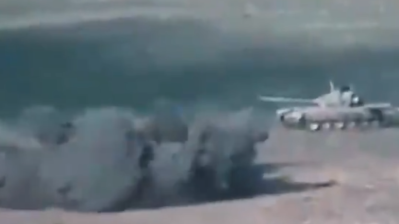 Armenian Prime Minister Nikol Pashinian on September 29 urged the international community to “decisively condemn the aggression of Azerbaijan and the actions of Turkey and demand Turkey get out of this region” as risks mounted that the fierce battles raging over the Nagorno-Karabakh territory could spark an all-out war.

As the bloody conflict showed no sign of easing by the end of its third day, Pashinian told Russian state TV that the “military presence of Turkey in this region... will bring further escalation and expansion of the scale of the conflict”. He later told the BBC that Armenia and Nagorno-Karabakh are facing an "existential threat" as things stand.

Ominously, as both Armenia and Azerbaijan spent the day accusing each other of shelling territory outside of Nagorno-Karabakh, killing and wounding civilians, Armenia’s defence ministry issued a warning that it was deploying weapons capable of “indiscriminate destruction of manpower” in the contested enclave in response to what it claimed was Azerbaijan’s use of “large-calibre systems”.

The day also saw Armenia claim that Nato member Turkey—which has given bellicose backing to Azerbaijan in the conflict but entirely denies reports that it has sent military advisers, Syrian militia mercenaries, fighter planes and armed drones to assist its close ally—had shot down an Armenian Su-25 fighter plane some way inside Armenia with the deployment of an F-16 fighter jet. Armenia has presented no evidence of the claimed attack, in which it said the pilot was killed, and Turkey and Azerbaijan have accused Yerevan of a fabrication for propaganda purposes.

Spotlight back on Russia

The alleged shooting down of the plane threw the spotlight back on whether Russia—a strategic ally of Armenia where it has military bases, but also on amicable terms with Azerbaijan—might enter the conflict on Armenia’s side. Both Armenia and Russia are members of the Collective Security Treaty Organisation (CSTO). An attack on one CSTO member can, at the formal request of the attacked nation, bring the other members to its defence. CSTO spokesperson Vladimir Zaynetdinov told Armenpress on September 29 that the organisation’s secretariat had not received an official request from Armenia to discuss the conflict.

In an interview with the BBC, he said that Azerbaijani forces had shelled villages and towns in Nagorno-Karabakh and inside Armenia itself on September 29, adding: “There are casualties among both military and civilians. Dozens are killed and hundreds are wounded.”

The atmosphere was not right for talks with Azerbaijan while military operations were taking place in the Nagorno-Karabakh region, Russian news agencies reported Pashinian as also saying.

For his part, Azerbaijan’s President Ilham Aliyev rejected any possibility of talks with Armenia over the breakaway Nagorno-Karabakh region—internationally recognised as within Azerbaijan but controlled by ethnic Armenians as a self-proclaimed republic for three decades—and said that Yerevan’s demands were unacceptable, Russian news agencies also reported. He added that Turkey’s role in the region was of a stabilising nature, remarking: “Turkey is not a party to the conflict, in no way participates in it and there is no need for this.”

Aliyev said Azerbaijan was calling up tens of thousands of reservists under a partial mobilisation announced on September 28. “We are able to punish the aggressor ourselves so that he would not even dare to look in our direction,” he said.

The Kremlin said Russian President Vladimir Putin on September 29 spoke by phone to Pashinian for the second time since the start of the crisis and said all sides should take measures to de-escalate. It did not refer to any contacts between Putin and Aliyev, but said Moscow was in constant contact with Turkey, Armenia and Azerbaijan.

“Any statements about military support or military activity definitely add fuel to the fire,” Kremlin spokesman Dmitry Peskov told reporters on September 29 on a conference call before reports broke of the claims of the Armenian jet being downed. Russia expected all countries and “particularly partner states such as Turkey” to do everything to persuade the warring sides to stop the violence, he said.

Omer Celik, spokesman for Turkish President Recep Tayyip Erdogan’s ruling AKP party, rejected calls for a ceasefire, saying that they effectively amounted to support for Armenia in the conflict.

After a closed-door discussion on September 29, the 15-member UN Security Council “expressed concern” about the clashes, condemned the use of force and backed a call by UN Secretary-General Antonio Guterres for an immediate halt to the fighting.

“Security Council members voiced support for the call by the Secretary General on the sides to immediately stop fighting, de-escalate tensions and return to meaningful negotiations without delay,” the council said in a statement.

In a commentary entitled “United States power vacuum risks escalating violence in Armenia-Azerbaijan”, Thomas de Waal, a senior fellow with Carnegie Europe, specialising in Eastern Europe and the Caucasus region, observed that a risk factor is that the US is “unusually disengaged”.

He added: “Groan as they may about this faraway conflict in the hills of the Caucasus, with its unpronounceable name, the Europeans and Americans will ultimately have no option but to engage with it more seriously. Turkey’s involvement, Iran’s proximity, the enigmatic role of Russia, the presence of major oil and gas pipelines all make this a region where a local flare-up can quickly turn into an international headache.”

CAUCASUS BLOG : What can Biden offer the Caucasus and Stans, all but forgotten about by Trump?
Armenia ‘to extend life of its 1970s Metsamor nuclear power plant after 2026’
LONG READ: The oligarch problem