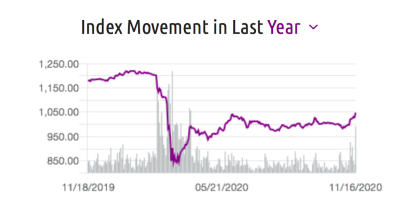 The two main indices of the Zagreb Stock Exchange, Crobex and Crobex10, rallied on November 16, with the Crobex10 reaching its highest level since before the pandemic-induced crash in March.

The rise in prices follows news of breakthroughs on vaccines against the coronavirus (COVID-19).

On November 16, the US company Modena said trials showed its new vaccine against COVID-19 is nearly 95% effective. Major international indices including the FTSE100 and Dow Jones jumped on the news.

That followed the announcement that the Pfizer/BioNTech vaccine is over 90% effective. The developers of Russia’s Sputnik V vaccine also say theirs is around 92% effective.

Croatia was among the worst-hit economies in the EU and emerging Europe regions given its dependence on the tourism sector. The launch of large-scale vaccination programmes by next spring would mean a rebound for its tourism sector next summer.

The revival in Croatian stocks also came after Moody’s decision to upgrade Croatia to Ba1, just one notch below investment grade.

ING THINK: Growth in the Balkans: from zero to hero again?
Labour demand down 28% y/y in Croatia in 2020
BRICKS & MORTAR: Rosier future beckons for CEE retailers after year of change and disruption

Higher borrowing by the governments of Bosnia’s two entities pushed up turnover — mainly trading in government bonds and T-bills — on the Sarajevo and Banja Luka exchanges, but the main indexes dropped.

Romania's construction work index increased by 7.8% y/y in November, a robust growth yet slower than in previous months of the year.

Support for EU accession has increase significantly compared to 2019 when about 66% of citizens were in favour shows survey commissioned by EU delegation to Montenegro.