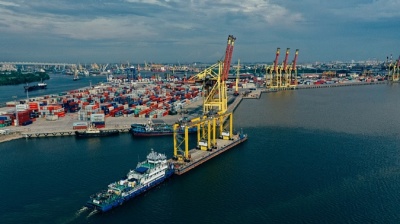 In his statement, Golovchenko noted that Belarus’ shipment problem does not only concern fertilisers but also “timber, wheeled cargoes and containers.” However, as with previous statements, the actual location of the port was not disclosed. Golovchenko wanted to “seal the deal first and reveal all the details later,” but claimed that the construction project would be started “very soon. Definitely by the end of the year.”

During a meeting with government officials on August 11, Belarusian President Lukashenko made it clear that Belarus had “exceptional” support from Russia. He also added that it was necessary to use “every available metre of the Russian ports for shipment” while Belarus built its new port facility and was eager to speed up the construction project.

According to Golovchenko, Belarus currently works with nine Russian ports to ship its goods and claimed that they were having “no problems with shipping or exporting Belarusian products” and were working to further reduce the shipment costs.

Belarusian officials have discussed shipment of the country's products through Russian ports in the Leningrad region since early last year, often claiming that the co-operation with Russia on the matter was proceeding at a rapid pace.

Last year there were statements of using an already constructed Russian port, but since Western countries have prohibited Russian petroleum and fertiliser exports through EU ports this year Russia is likely to need all of its available port capacity for its own exports.

It is likely due to this that Lukashenko this year began talking about acquiring “land plots” in the Leningrad region for the construction of a Belarusian port on “Russia’s Baltic Sea shore.”

Even if this construction project begins this year, it’s uncertain when it could be finished. Belarus’ annual shipments of potash amount to approximately 11-12mn tonnes per year (tpy), along with petroleum products, timber and more, so this would require the construction of a very large port.

Golovchenko has acknowledged the considerable costs that the port construction will entail; Belarus’ main option for financing right now would be to borrow even more money from Russia, which would further increase the Lukashenko regime’s dependence on Moscow.

According to Belarus’ Ministry of Transport and Communications, the state-owned railway company Belarusian Railways had developed 40 new export routes to more than 20 countries. The lion's share of these new export routes are railway routes going to or through China, Central Asia and the Caucasus.

When commenting on this question, Golovchenko noted that underdeveloped railway infrastructure remained a bottleneck for Belarusian exports to the east. However, Golovchenko said that a lot of Belarus’ exports were already being redirected eastwards.

Belarus’ turn to east could therefore be showing some results, but there’s still many billions of dollars more in exports to redirect, and railway infrastructure from Belarus to China, Central Asia and the Caucasus can’t be updated overnight.

It’s unlikely that Belarus will find new markets in these regions to offset all of its lost markets in western Europe, and while trying, it will continue to face logistical difficulties.