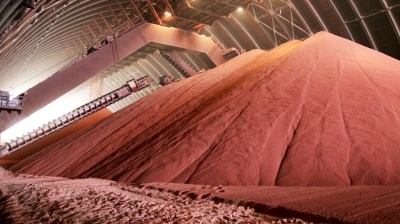 On Monday, August 1, the newly appointed Belarusian ambassador to Russia, Dmitry Krutoi, told the Belarusian state media outlet BelTA that Belarus is looking to redirect $15bn of its exports to Russia.

Most likely the statement was made in reference to Belarus’ potash fertilisers and refined petroleum products that Belarus is looking to transit through Russia in order to reach global markets.

In late May, Belarus’ First Deputy Prime Minister, Nikolai Snopkov, stated that Belarus is expecting to lose 30% of its export revenues (approx. $14bn) this year, as western sanctions and the war in Ukraine prevent these products from using their regular transit routes through Baltic ports and Ukraine’s port in Odesa. Potash fertilisers and refined petroleum products alone make up almost 30% of Belarusian exports.

The threat against the transit routes for Belarus’ largest foreign currency earning exports was already obvious in early 2021, when Belarusian officials began talking about using Russian ports to export its sanctioned goods.

Throughout 2021, Belarusian officials made numerous statements about how well this export co-operation was progressing with Russian ports in Ust-Luga (Leningrad region) and Murmansk. However, independent analysts were (and still are) highly sceptical about Belarus’ ability to use the Russian ports.

On June 24, Belarusian President Alexander Lukashenko announced that plans were being made with the St. Petersburg governor for Belarus to acquire “land plots” in order to build its own port structures. The next day, Belarusian state news outlet BelTA mentioned that Lukashenko was “satisfied with [the] location of [the] Belarusian port on Russia’s Baltic Sea shore.”

The Russian news site Portnews reports that while the exact areas and other support which Belarus could have been offered are still undisclosed, the plan will undoubtedly face considerable problems.

Russia had expected to export around 8mn tonnes of mineral fertilisers through the Baltic countries’ ports and since the sanctions have struggled with redirecting these exports to Russian ports. Since Belarusian potash exports amount to around 11-12mn tonnes per year (tpy), there’s no way the Russian ports could currently handle both Belarusian and Russian mineral fertilisers.

Another option would be to use container shipments or big bags, but this would not even allow for exports of a tenth of Belarus’ declared volume.

This leaves Belarus with only one other option: to construct its own port in Russia’s Leningrad region. However, such a project would take years, and Belarus would therefore be sure to miss out on most of the world's price increases in potash. Moreover, the costs that building a port entail are huge and certainly way beyond the currently very constrained Belarusian state budget.

Belarus may lose out on long-term potash deals

Belarus’ potash giant Belaruskali exports 17% of its potash to Brazil and 13% to India. Now, Belarus long-term trade agreements are threatened as these countries chose to move away from Belarusian potash amid the Western sanctions regime.

This spring, Brazil’s need to halt its potash imports from Belarus due to western sanctions made the country’s agricultural minister declare the supply of fertilisers as a matter of national security. To secure its supply, the agricultural minister announced that Brazil would look into developing its own production and exploiting the largest potash mine in Latin America.

In early June, it was reported that Russia’s Sberbank had acted as an intermediary between the Belarusian Potash Co. (BPC) and Indian Potash Ltd (IPL) in a new deal where IPL would pay the BPC in rupees instead of dollars to avoid the western sanctions regime.

However, only a “negligible” amount of the payments was said to have been converted from rupees to rubles.

To secure its future potash supply, India is now, like Brazil, also looking to hedge itself against the expected price rises in potash through investments and new multi-year import deals, according to India’s Chemical and Fertiliser Minister, Mansukh Mandaviya.

According to the minister, Indian potash firms are currently looking to buy stakes in phosphoric acid mines in Senegal and DAP mines in Saudi Arabia as well as other similar assets across Africa and in Canada.

Indian firms might sign 3-5 year deals on importing 2mn tonnes worth of fertilisers from Saudi Arabia, and some firms have already signed 3-5 year deals with companies in Russia, Jordan and Israel.

While Belarus is currently the third largest potash producer in the world, the outlook for its exports of the commodity is not looking good. The supply issues created by Western markets undoubtedly raise prices. However, in the medium and long term, Belarus could end up being outcompeted from the market rather than benefiting from the price increases, unless it quickly resolves its port access problem.

Kazakhstan: Swathes of land confiscated from Nazarbayev’s brother ahead of vote
2 hours ago
Jury still out on the effectiveness of the oil price cap scheme on Russian exports
5 hours ago
Turkey numb with shock as fears grow death toll from two giant earthquakes could climb past 20,000
9 hours ago
IMF issues Russian economic growth outlook that is more optimistic than Bank of Russia's
1 day ago
INTERVIEW: Helen Rodwell, head of CMS’ corporate practice in CEE
2 days ago