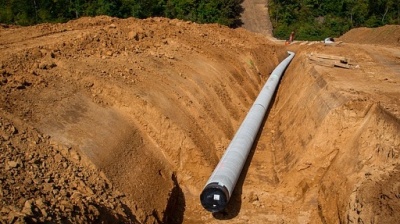 Oilserv, one of Nigeria’s largest oilfield services providers, has indicated that it is ready to participate in either of the two major natural gas pipeline projects that the national oil company (NOC) is considering.

Emeka Okwuosa, the chairman and CEO of Oilserv, said on October 18 that his firm was interested in both the Nigeria-Morocco Gas Pipeline (NMGP), which envisions the construction of a 5,600-km offshore network, and the Trans-Sahara Gas Pipeline (TSGP), which calls for the building of an onshore network from northern Nigeria to Algeria’s Hassi R’Mel field via Niger.

Oilserv already has the experience and capacity necessary to carry out major pipeline projects of this type, he stated during an interactive online discussion with reporters. “Oilserv is always ready and well prepared to be able to make the difference in the delivery of the emerging pipeline projects in the continent,” he declared.

Okwuosa acknowledged that Nigerian National Petroleum Co. Ltd. (NNPCL) had recently signed several memoranda of understanding (MoU) on the NMGP project. He pointed out, though, that the NOC also remained interested in TSGP.

He noted that the latter would begin as an extension of the Ajaokuta-Kaduna-Kano (AKK) pipeline, which is being built for the purpose of transporting gas from fields in southern Nigeria to the northern regions of the country. Linking the AKK system to TSGP will create another route to the European market for Nigerian gas via Algeria, which is a major supplier to buyers in Europe, Okwuosa stated.

“The Trans-Saharan Gas Pipeline is actually one of the two major international pipelines that are being envisaged. The pipeline is the one that will take off from Kano and go through Niger Republic and Algeria and end up in Europe,” he told journalists.

“The project that is actually hot now and is on board in terms of process is the Nigeria-Morocco, which will run offshore West Africa to North Africa. It will go all the way from the Niger Delta to offshore Lagos. It will then go through all the countries on the coast of West Africa until it gets to Mauritania. And then it goes on land from the back of Mauritania to Morocco, where it crosses the channel until it gets to Spain. So these are the key pipelines that are upcoming.”

Okwuosa indicated that Oilserv was not necessarily expecting to be the leading contractor for pipeline construction but emphasised that the company was eager to participate as the projects moved forward. “[We] are very aware of the opportunities, and we have been part of that,” he said. “We know that it is a project that might require more than one contractor to execute, but we want to be part of it because we have the capacity to deliver our scopes.”

NNPCL and its contractors began building the AKK pipeline along a 614-km route that runs northward from the left bank of the Niger River in Kogi state to the capital city of Kano state in June 2020. When finished, the pipe will have a nameplate capacity of 99.11mn cubic metres per day of gas, or around 36.175bn cubic metres per year. Initially, throughput will amount to around 56.64 mcm per day, or around 20.67 bcm per year.

According to previous reports, the pipeline will pump gas from fields in the southern part of the country to new domestic customers, including thermal power plants (TPPs) with a combined generating capacity of 3,600 MW and petrochemical producers that use gas as feedstock. As such, it is a key component of the Nigerian government’s domestic gasification strategy.