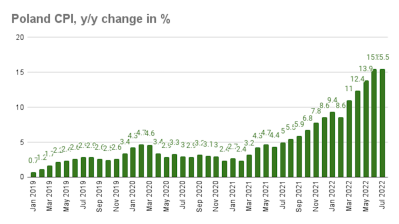 Polish CPI inflation stayed at 15.5% y/y in July, the first time since February when the annual reading did not accelerate, the statistical office GUS said in a flash estimate on July 29 (chart).

The reading is in line with consensus and could be a signal that inflation tide is finally easing in Poland, as consumer demand is weakening after a 10-month streak of interest rate hikes by the National Bank of Poland (NBP). The easing of oil price growth also helped, analysts point out.

“Inflation remains very high, although the July reading, as well as commodity prices on international markets, point to an ever closer peak, which will be slightly higher than the July figure,” Bank Millennium said in a note.

It is too early, however, to say with certainty that Poland’s inflation problems are over, Bank Millennium added.

A number of caveats still apply, including uncertainty as to the prices of energy and heating fuels – gas in particular – ahead of the cold season. A global economic slowdown could offset that to an extent via possible easing of fuel prices.

The NBP will certainly take note of the flash CPI reading and could end the long tightening cycle with one more hike of 50bp in September, analysts say. That would take the reference interest rate to 7%.

NBP Governor Adam Glapinski was recently caught on camera, responding to a question from a woman who happened to meet him in Sopot, a holiday resort on the Polish seaside.

“We currently have the highest interest rates and the highest inflation,” holiday-mode Glapinski told the woman in unusual circumstances for making a statement on monetary policy.

“If there is going to be one more [rate increase] it’ll only be of 0.25 [of a percentage point],” Glapinski added.

The increase in the inflation rate came on the back of growth in all major components, GUS showed in the breakdown of the data.

Core inflation remained at around 9.1%-9.2% y/y in July, analysts estimate.

In monthly terms, the CPI increased 0.4% in July, the expansion easing 1.1pp versus the preceding month.

Poland’s CPI growth rate picks up just 0.1pp to 15.6% y/y in July
2 days ago
Romanian stock exchange reaches new record as BET-TR rises 5.7% ytd
2 days ago
Population decline to take Emerging Europe back to the early 20th century
2 days ago
Russia’s international reserves up $3.6bn in one week to $571bn
2 days ago
CPI inflation in Moldova hits 33.6% y/y in July
3 days ago