Is Putin preparing to use Belarusian territory for another large-scale missile attack on Ukraine? 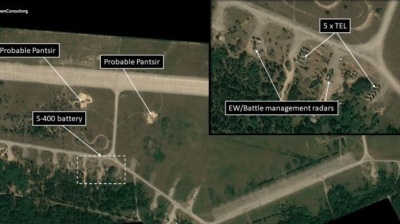 By analysing satellite imagery, the Hajun Project estimated that Russia had deployed 10-14 missile systems of the types S-300 and S-400, two Pantsir-1 anti-aircraft defence systems and three radar systems at the Ziabrauka airfield by August 12.

The fact that there are also between 15-60 rockets for the missile systems, with continuous rocket deliveries being made by Russian aircrafts, could indicate that Russia is planning a large-scale missile attack on Ukraine from Belarusian territory in the coming weeks.

On August 10, several large explosions were heard from the Ziabrauka airfield after what appears to have been the explosion of a military aircraft. Ukraine has not taken credit for the explosion and the official Belarusian version claims that it was caused by a vehicle that caught fire during an inspection run.

Bne IntelliNews has earlier this month reported on the ways in which Belarus has been stepping up its support for Russia’s invasion of Ukraine in the past couple of months.

Moreover, according to a recent announcement by Ukraine’s General Staff, around 13,000 people from active or formerly active Belarusian military units from Belarus’ special operations forces as well as from the OMON riot police force have signed contracts with Russia to fight in the war.

There has also been a slight increase in the number of Russian and Belarusian tanks and troops near the Belarus-Ukraine border in the past couple of months. However, the number of troops deployed there are still not sufficient to conduct an invasion like the one on February 24.

The UK’s Ministry of Defence warned on August 10 that Russia may soon form a new army corps with up to 15,000-20,000 troops, which could mean that Putin is preparing for a new offensive in the east.

Polish proposed ban on Russian rubber may give the European tyre industry a flat
22 hours ago
Prague to have a new municipal government after record-long negotiations
1 day ago
Party congresses of Hungarian opposition demonstrate deep divisions
1 day ago
At least 500 dead after huge earthquake hits Turkey, Syria in early hours
1 day ago
Turkish minister tells US ambassador ‘Take your dirty hands off Turkey’ as sanctions sparks fly
1 day ago