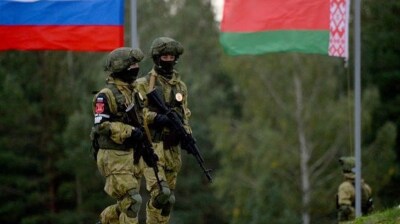 Belarus has slowly been increasing its combat readiness since Russia began its invasion of Ukraine on February 24. While not participating in the invasion directly, Belarus has continuously allowed Russian forces to strike Ukraine from Belarusian territory and supplied Russia with military hardware as well as ammunition and mercenaries.

However, polls conducted by independent organisations such as Chatham House still show that Belarusians are not interested in directly joining the war. While most analysts agree that Lukashenko probably won’t join for fear of going against broader public opinion, recent military activity by Russia and Belarus on Belarusian territory gives cause for concern.

Mobilisation on and attacks from Belarusian territory

On August 5, Belarus extended its latest military exercises for another week. Belarus has repeatedly been announcing and extending new military exercises since February 24. Some of these have been pointed out by Ukrainian officials as already having been planned, and therefore they have not posed any threat.

Nevertheless, the nature and shape of Belarus' exercises have changed considerably from previous years. Belarusian troops have this year been practising how to force rivers with pontoon bridges instead of using vehicles, conducted “peace to wartime exercises”, practised how to escort and force the landing of intercepted aircrafts and also heavily practised radio warfare.

Belarusians have shown their unwillingness to participate in Russia’s invasion not only through polls but also in practice. “The railway war” by activists in Belarus this spring caused major delays for Russian troops and resulted in mass arrests and a broadened definition of the death penalty being made to scare off future anti-war activism.

Belarus has also been extensively mobilising and practising call-ups since February 24. However, many Belarusians resisted the mobilisation by fleeing abroad. The poor results of the mobilisation efforts could have been the reason behind President Alexander Lukashenko’s decision to dismiss Major General Alexander Shkirenko in July as the head of Belarus’ Armed Force’s Main Organisational and Mobilisation Department.

In mid-July, The Hajun Project cited three mobilisation developments that may give cause for concern that Belarus is preparing to actively join Russia’s war:

In July, Belarus reportedly gave Russia full control of the Ziabrauka airfield located less than 20 miles (32 km) from Ukraine in Belarus’ south-eastern Gomel region. The Hajun Project suggests that at least six Iskander rockets may be stationed at the airfield.

Russia was not late in utilising its control of this airfield and on July 28, it launched at least 25 missiles against Ukraine’s Kyiv and Chernihiv oblasts from Ziabrauka. Among the missiles fired were Iskander rockets, and on Friday, more Iskander missiles were reportedly being moved from the Minsk region towards the Ziabrauka airfield.

Although Russia is slowly increasing its military presence in Belarus, as Belarus is repeatedly extending its exercises, no mass transportation of military equipment to the southern regions has been recorded.

However, there are other things happening that give cause for concern.

According to Oleksandr Shtupun, spokesperson for Ukraine’s General Staff, Russia is using Belarus to move reconnaissance units into Ukraine. Belarus has so far not responded to these allegations.

Belarus’ increased focus on cyber warfare, radio warfare and signals intelligence against both Ukraine and other neighbouring countries could be paving the way for these Russian reconnaissance units. In turn, these reconnaissance units could be laying the groundwork for a new, and possible joint, advance into the Kyiv region.

A recent discovery made by twitter user John Wiseman gives another clue to why radio warfare from Belarusian territory may indicate preparations for an invasion. According to Wiseman’s data, Belarus began jamming GPS/GLONASS systems around Ukraine and Belarus on February 15. The Hajun Project noted already in March that GPS-jamming signals emanating from the Minsk region could have been used to protect the Russia troops’ command post in Belarus.

While no new similar jams has been recorded so far, Belarus’ increasing cyber warfare, radio warfare and use of signals intelligence could be the prelude to something bigger.

It’s necessary to note that Belarus is today more prepared for defence than it is for war.

Ukraine has mined and closed off several crossings and installed camera monitoring systems along its border with Belarus since Russia pulled back its troops from northern Ukraine in late March. Ukraine’s Foreign Affairs Minister Dmytro Kuleba has also repeatedly warned the Minsk regime that all diplomatic contact will be stopped between the two countries in case Belarus decides to actively join Russia’s invasion with its own military.

There are still many factors speaking against Belarus in fact attempting to invade Ukraine. However, with most railway partisans behind bars, many anti-war protesters and more and more of the Hajun Project’s contributors arrested, Belarus could still aid Russia in another push for Kyiv as Russia’s advance in the east stalls.

Kazakhstan: Swathes of land confiscated from Nazarbayev’s brother ahead of vote
2 hours ago
Jury still out on the effectiveness of the oil price cap scheme on Russian exports
5 hours ago
Turkey numb with shock as fears grow death toll from two giant earthquakes could climb past 20,000
10 hours ago
IMF issues Russian economic growth outlook that is more optimistic than Bank of Russia's
1 day ago
INTERVIEW: Helen Rodwell, head of CMS’ corporate practice in CEE
2 days ago