Uzbekistan showcases IT progress at ICT Week 2022 in Samarkand 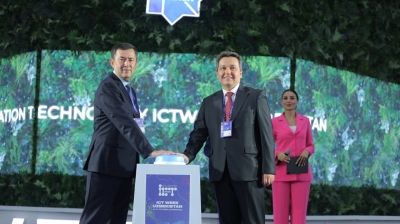 Throughout history, countries have found themselves slaves to their geography, and the geographical prison in which the Central Asian nation of Uzbekistan finds itself is a particularly tough one. Uzbekistan is one of only two “double-landlocked” nations in the world (the other being the Alpine country Liechtenstein) and, as a result, is at the mercy of its neighbours, particularly the Russian Federation and its rail network, for access to the sea. Such a geographical predicament causes Uzbekistan logistical severe problems.

Geography is not destiny, however. In recent years, Uzbekistan has not only become more important as a transport node for Eurasia. Chinese high-speed rail networks are springing up around the country in Beijing’s attempt to revive the Silk Roads, a trade network in which empires based out of what is now Uzbekistan often played a key role. Uzbekistan’s government, despite its reverence of Amur Timur, the Turco-Mongolic King whose undefeated military campaigns subjugated much of the lands adjacent to the Silk Road network, is seeking a non-physical solution to its geographical predicament. Uzbekistan seeks to break free of the shackles of its geography through that global system of communication networks known as the internet.

Uzbekistan's ICT Week 2022 was a chance for the country to showcase the results of its ambitious economic reform programme under President Shavkat Mirziyoyev. The World Bank has stated that Uzbekistan is going through an "unprecedented economic and social transformation." Speakers at ICT week were quick to point to the facts too, with Uzbekistan now occupying ninth place globally in terms of e-government rankings, up 18 places from just last year, with expectations the country will climb even further. Improvements in e-government will also help improve transparency in a country that has been wracked by systemic corruption problems.

A key node in Uzbekistan's new IT infrastructure is its "IT Park", as the ministry of ICT Development looks to create attractive conditions for potential tech workers. Tashkent's technology park is a key part of encouraging those looking to relocate their IT businesses to Uzbekistan. By becoming a member of the park, Sherzod Shermatov, Uzbekistan's Minister for Development of ICT, said "you are completely free from taxes" until January 1, 2028. The IT visa provided to IT workers also allows them almost the same rights as Uzbek citizens, letting them to purchase property. Those willing to relocate to Uzbekistan have substantially increased following Russia's invasion of Ukraine in February, with many Russians, Belarusians and Ukrainians looking to start a new life in Central Asia. It is no coincidence that the IT visa was launched just days after Russia's invasion.

It appears that the results are already starting to show, with the export of residences having risen twelvefold, the number of foreign companies growing tenfold (from 12 to 132 in 2019) and the volume of IT services increasing sixfold. Officially employed IT workers have climbed from 4,584 in 2019 to 13,500 in 2022. The export of IT services has also increased by five times, with some speculating that the government's target of $1bn worth of IT exports by 2028 (up 50 times from 2021) could be within reach.

The future could also be bright for Uzbekistan, as what it lacks in geography it makes up with in demography. Uzbekistan, and Central Asia generally, is the area of the former Soviet Union that has seen its population increase since 1991, with demographic growth and a young population looking to stay stable in the new future. This point was highlighted several times by speakers at ICT Week, and the government is keen to capitalise on the fact. Each year, 30,000 graduate annually from IT-related courses at 58 universities dedicated to IT, with the number continuing to increase.

At the peak of Samarkand’s power under the Timurid dynasty, North America was still unknown to the Islamic world. Yet today Uzbekistan’s modern rulers see the United States as the goal for the country’s IT export market. The US accounts for the lion’s share of the global IT outsourcing market, expected to be worth as much as $682.3bn by 2027 – up from just over $526bn last year, according to Mordor Intelligence. About 80% of Uzbekistan’s IT exports currently go to the US.

With Russia's invasion of Ukraine and the Taliban's reoccupation of Afghanistan, Uzbekistan's geopolitical importance to the United States is only set to grow. This, coupled with its position at the heart of Central Asia, at the centre of China's One Belt, One Road (OBOR) initiative and its growing young population, means that Uzbekistan's ascension from obscurity is not only possible but highly likely.

Russia forges ahead with gas ambitions in Uzbekistan, Kazakhstan
bneGREEN: Renewable energy was a hot topic in Davos but for Europe, much work remains
Big freeze that was feared by gas hungry Europe hits Central Asia, Iran

Poland basks in the glory of being Europe’s chief ally of Kyiv
1 day ago
Russia forges ahead with gas ambitions in Uzbekistan, Kazakhstan
3 days ago
Mongolian government accused of rushing through veiled law that dismantles freedom of speech
4 days ago
Russia is preparing for spring mass mobilisation
4 days ago
Davos climate change debates hindered by lack of Russian, Chinese delegates
4 days ago