Belarus Corruption Watch: How the Lukashenko family’s friends in the construction business hide from sanctions 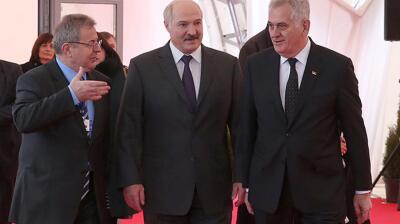 The Serbian brothers Bogoljub and Dragomir Karić have (together with the rest of their family) been running construction businesses throughout the Balkans and post-Soviet countries in the east since 1991. In their latest joint investigation, the Belarusian Investigative Centre (BIC) and the Organised Crime and Corruption Reporting Project (OCCRP) has outlined the brothers’ connections to the Minsk regime and investigated the sales and transfers of the family’s various properties.

The Karić brothers became known in the 1990’s as sponsors of Slobodan Milosević’s regime and Bogoljub and Dragomir have advanced their political careers on the side of their business ventures.

In 2004, Bogoljub Karić founded the political party Strength of Serbia movement, which his brother Dragomir joined the same year. Dragomir has since held a position in Belgrade’s City Assembly and has been a member of Serbia’s Parliament since 2012. Their political careers have gone hand in hand with their business ventures and it’s worth noting that Dragomir has either chaired or been a member of Serbia’s parliamentary friendship groups for the countries he’s done the most business in, such as the post-Soviet countries and Cyprus.

In 2006, Bogoljub established the integrated real estate, investment and development company Dana Holdings, and since then construction projects by Dana Holdings have been a common sight in Minsk, often being criticised for their negative effects on city planning.

As BIC put it in their investigation, “it’s common knowledge that one cannot run a big business in Belarus without Aleksander Lukashenka’s support”, support which the Karić brothers quickly earned.

In 2006, Bogoljub was charged with tax evasion and money laundering in Serbia. However, he fled to his friend the Belarusian strongman Alexander Lukashenko, who helped him evade prosecution in Serbia until the case was dropped. In 2010, he obtained a Belarusian passport. In 2009 Dragomir became an honorary consul for Belarus in Serbia and was praised by Lukashenko for his contributions to “developing” trade ties between the two countries. The two brothers hold frequent meetings with Lukashenko and their meetings have even been featured in the Belarusian state-owned media outlet, BelTA’s reporting.

Currently, their company Dana Astra is behind the the development of the Minsk-Mir residential project, which is heavily marketed by state-owned Belarusian media. At one point in 2021, Lukashenko handed over land to three companies related to the Karić brothers worth $1bn by exempting the company from the necessary land auctioning procedure. Moreover, Lukashenko exempted the company from certain taxes and allowed the use of taxpayer's money to pay for water, electricity and road infrastructure in the companies' residential developments.

The Karić and Lukashenko families also have close ties. Dana Holdings is a current sponsor of Belarus’ National Olympics Committee, which is headed by none other than Alexander Lukashenko’s son Viktor Lukashenko. Viktor’s wife Liliya Lukashenko worked at Dana Astra, a subsidiary of Dana Holdings, between 2014-2016. During her time at Dana Astra, Liliya also became close with Bogoljub’s wife and the two travelled to Greece and Cyprus together several times between 2011 and 2016, often accompanied by Viktor Lukashenko, their children and Viktor’s mother (the ex-wife of Alexander Lukashenko). After 2016, Liliya went on to head “Art Chaos,” an art gallery located in the Dana Mall shopping centre owned by Dana Astra.

The sale of Dana Astra and sanctions evasion

The EU and UK sanctioned Dana Holdings (Cyprus) and Dana Astra (Belarus) in December 2020 due to the Karić brother’s close ties to the Lukashenko family. In August 2021, the US followed the EU and UK sanctions as well as sanctioning one of Bogoljub’s sons, Nebojsa Karić, and two off-shore firms controlled by Dana Holdings through five companies on Cyprus. In its official statement, the US Department of Treasury branded the Karić family “Lukashenko’s construction wallet.” In June 2022, sanctions against Bogoljub Karić were included in the EU’s sixth sanctions package for his support to and benefits from the Lukashenko regime.

To protect their assets, the Karićs made their family friend Nagip Behluli the head of Dana Holdings in February this year, and already before the 2020 sanctions, the Karić brothers had foreseen the sanctions and sold their five Cyprus subsidiaries to a company in the UAE called Enterprise Developments Holding two weeks prior to the sanctions. Between 2008 and 2020, the Karićs transferred over €170mn of their Belarusian subsidiary Dana Astra’s profits to these five subsidiaries in Cyprus as dividends.

The head of Enterprise Developments Holding is also a family friend of the Karićs. 41-year-old British businessman Mostafa El-Tobgy has worked at a consulting firm owned by Bogoljub’s daughter Elena, but in 2010 he suddenly transferred all his shares in the company to Bogoljub’s other daughter Danića. At one point he was also the executive director of the Dana Holdings company group, and he’s featured in several social media posts with the Karić family members. Furthermore, El-Tobgy is a resident of Belarus, where he has a “special work permit” and lives in one of Dana Astra’s upmarket apartments.

Experts from the OCCRP say that this transaction has “all signs of money laundering.” This is because first of all, Dana Holdings sold the companies just before the sanctions were announced; secondly, because the controlling stake in the companies were transferred from one tax-haven country to another; thirdly, because of El-Tobgy’s strong affiliation with the Karić family. According to an export from the OCCRP, the plan was to make a “paper trail for the money that legally allows them to access this €700mn.” Through this paper trail, they can access the money in a country where they aren’t sanctioned and still receive dividends from hidden assets.

The OCCRP has also showed that Bogoljub Karić and two of his children not only own property in Dubai and Minsk, but that there are also seven flats in London registered under Dejan Lazarević, Bogoljub’s son-in-law.

BIC sent a formal request for comment from the Karić brothers on their strange transactions between Dana Astra, Dana Holdings and its five companies in Cyprus as well as with El-Togby’s Enterprise Developments Holding and their Dubai and London real estate assets. The Karić’s family lawyer is expected to get back with a comment in approximately three weeks.

This investigation has further revealed the extent of corruption related to Lukashenko’s family, as well as the width of the Karić family’s business networks that help them evade the sanctions imposed on them for their support of the Lukashenko regime. Previously bne IntelliNews has reported on three other investigations made by BIC and its partners, the last of which covered the Belarusian government elites' vacations to and real estate assets in the EU.

Poland basks in the glory of being Europe’s chief ally of Kyiv
1 day ago
Russia forges ahead with gas ambitions in Uzbekistan, Kazakhstan
2 days ago
Mongolian government accused of rushing through veiled law that dismantles freedom of speech
4 days ago
Russia is preparing for spring mass mobilisation
4 days ago
Davos climate change debates hindered by lack of Russian, Chinese delegates
4 days ago