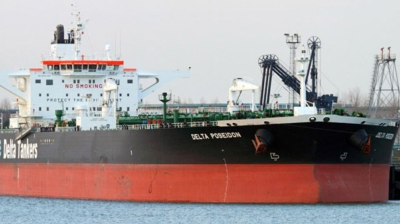 One of the two Greek tankers seized in the Persian Gulf, the Delta Poseidon. / Fars News Agency.
By bne IntelIiNews May 29, 2022

Iran on May 27 seized two Greek tankers in helicopter-launched operations in the Persian Gulf in what appeared to be a response to Greece assisting the US by grabbing an Iranian oil tanker in the Mediterranean in a sanctions-enforcement case earlier in the week.

The taking of the Greek tankers—the Prudent Warrior and the Delta Poseidon—marked the first such action in several months in the Gulf, but tensions between Iran, the US and allies of Washington are on the rise with the stalling of efforts to secure a reinstatement of the 2015 nuclear deal, or JCPOA.

Greece’s foreign minister complained to the Iranian ambassador to Athens about the “violent taking over of two Greek-flagged ships” by the Islamic Revolutionary Guard Corps (IRGC).

“These acts effectively amount to acts of piracy,” a Greek foreign ministry statement said, calling for the immediate return of the ships and their crews.

Tensions between Iran and the West might also have been further aggravated by an “accident” at Iran’s high-security Parchin complex on May 25 that left one engineer dead and another injured. The New York Times reported on May 29 that the so-called accident was an attack using quadcopter suicide drones that fitted a pattern of Israeli operations against Iranian military and nuclear development infrastructure. The facility is reportedly a site where Iran is developing drone technology.

According to the NYT, Israel has also informed the US that it was behind the assassination of an IRGC colonel, Sayyad Khodai. He was shot by gunmen on motorbikes as he was getting out of his car outside his home in Tehran on May 22. An unnamed intelligence official was cited as stating that Israel wanted the killing to serve as a warning to Tehran to cease targeting Israeli citizens abroad.

On May 26, the IRGC commander, Maj Gen Hossein Salami, said the killing would be avenged. “Our enemies should wait. Our reactions will be harsh and we will definitely make the enemy regret its action,” Salami said, according to Press TV.

In February, Israel reportedly sent six quadcopter drones to attack an Iranian military drone manufacturing facility near Kermanshah. In retaliation, Iran launched a missile strike on buildings inside Iraq said to have been used by Israeli intelligence to launch the attack on Kermanshah, according to regional reports.