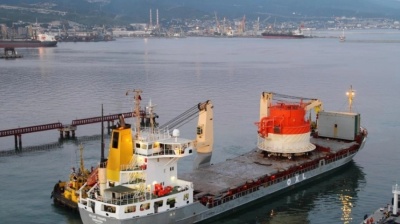 Around 80% of Kazakh crude is exported through the Russian Black Sea port of Novorossiysk. / CPC.ru
By bne IntelIiNews September 7, 2022

S&P Global Ratings has lowered its outlook on Kazakhstan to negative, from stable, on concern about how the country relies on export infrastructure laid across Russia to ship most of its crude.

Since the Kremlin invaded Ukraine six months ago, Kazakhstan—which has riled some influential voices in Russia by failing to offer any support for Moscow’s choice to fight a war in Ukraine—has several times experienced restrictions beyond its control on its oil exports from Novorossijsk on Russia’s Black Sea coast, which serves as the main oil shipment artery for the Kazakhs. Kazakh oil flows to the port in a pipeline operated by the Caspian Pipeline Consortium (CPC). The S&P downgrade was triggered by an assessment that the CPC pipeline route remains vulnerable to potential disruption.

S&P said: “Against the backdrop of the uncertain geopolitical environment, in our view, Russia could disrupt flows through the pipeline to gain leverage against Kazakhstan or the consumers of the oil, namely countries in Europe that support Ukraine, or to hurt Western interests in the Kazakh oil sector (shareholders of the pipeline and oil fields include Chevron, ExxonMobil, Shell, and TotalEnergies). In such an event, disruptions at the pipeline could be unrelated to Russia's relationship with Kazakhstan, but damaging nonetheless.”

CPC transits around 80% of Kazakhstan’s crude exports via its pipeline that extends to the Novorossiysk terminal. It is the major export route for the key Tengiz, Kashagan and Karachaganak oilfields of Kazakhstan. All three oilfields are operated by foreign consortia.

The pipeline is not subject to Western sanctions imposed on Russia in the wake of the invasion of Ukraine.

“If Kazakhstan's oil export capacity reduced for a prolonged period, this could negatively affect external and fiscal metrics,” S&P noted.

As well as revising the outlook on Kazakhstan to negative from stable, S&P affirmed its 'BBB-/A-3' sovereign credit ratings on the Central Asian country.

S&P added: “We could lower the ratings over the next two years if Kazakhstan's oil exports declined significantly for a prolonged period, weakening the economy's external position and increasing fiscal deficits. This could be the case, for instance, if the CPC pipeline's loading capacity were incapacitated for an extended period. We could also lower the ratings if inflationary pressures and rising borrowing costs continued to increase the government's debt-servicing burden.

“Further disruptive factors, such as a deterioration in domestic stability, evidenced by incidents of severe civil unrest, could also lead to a downgrade.”

There have been at least four incidents this year affecting the CPC pipeline. These incidents include storm-related damage in March that reduced exports for almost a month; safety inspections for World War II-era deep-sea mines in June; a Russian court ruling in July to stop loading for 30 days due to alleged violations of the pipeline's oil spill plan, which was overturned a few days later and replaced with a minor fine; and most recently, subsea cracks discovered on buoyancy tanks that could limit loading on two out of three CPC single-point moorings for around a month.

“As a result [of the disruptions], we expect Kazakh oil production of 85.6 million tons per year (equivalent to about 1.8 million barrels per day [bbl/day]); this is lower than our previous estimate of 87.5 million tons for 2022,” S&P said.

It also stated: “In our view, geopolitical tensions caused by the Russia-Ukraine conflict could be the source of potential disruptions at the CPC pipeline… About 90% of oil flowing through the CPC pipeline originates from Kazakhstan (representing 54 million tons or about 1 million bbl/day), while the remaining 10% is Russian.

“Alternative export routes to the CPC pipeline can replace less than a third of its capacity and are more logistically challenging and expensive.”

Oil is the key economic sector in Kazakhstan, directly accounting for about 15% of GDP, more than 30% of general government revenue, and over half of exports, according to S&P.

In addition to the difficulties with oil export, “the government's fiscal response this year to the civil unrest in early January could make it more challenging to curb spending growth from 2023,” said S&P.

It added: “Meanwhile, we expect lower oil prices from 2024 will likely weigh on revenue. We anticipate the government's net asset position will turn into a small debtor position from 2022, largely due to rising debt. At the same time, government borrowing costs are increasing, given the rising interest rates and reliance on domestic debt issuances. We project that interest as a proportion of revenue will average 9.8% over 2022-2025.

“The ratings on Kazakhstan are supported by the country's strong fiscal and external balance sheets. These were built primarily with budgetary surpluses generated during the period of high commodity prices that ended in late 2014. The related assets were accumulated in the National Fund of the Republic of Kazakhstan (NFRK) and largely invested abroad. We forecast that the economy's liquid external assets will exceed external debt through 2025.”