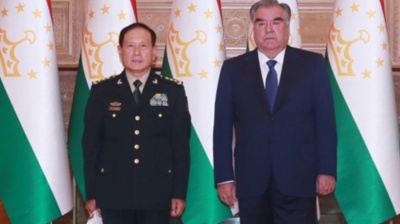 The proposal to transfer ownership of an existing base to China was reportedly made by Tajik President Emomali Rahmon (right) to Chinese Defence Minister Wei Fenghe during the latter's trip to Tajikistan earlier this year. / mod.gov.cn.
By Kanat Shaku in Almaty October 28, 2021

Tajikistan has approved an offer from China to construct a new security base near the Tajik-Afghan border amid warnings by Tajik officials of growing threats emanating from Afghanistan.

The Tajik government has also offered to transfer full control of an existing, but unacknowledged, Chinese military base in the country to Beijing, while waiving any future rent in exchange for military aid from China, RFE/RL reported, citing a communique sent from the Chinese Embassy in Dushanbe to Tajikistan’s Foreign Ministry.

China operates the military base in Tajikistan’s Murghab Region near the Afghan border, where a collection of facilities and outposts is believed to have been in operation for five years and was the subject of a recent investigation by RFE/RL. The investigation showed China expanding its role in the area. Both the Tajik and Chinese governments continue to deny the existence of the Murghab base.

The developments mark an expansion of China’s security presence in Central Asia amid potential threats of terrorism stemming from the now Taliban-run Afghanistan. At the same time, China, which has a short 76-kilometre (47-mile) border with Afghanistan at the end of the narrow Wakhan Corridor, crossed by several mountain passes, finds itself in the difficult position of navigating tensions between the Tajik government and the Taliban as Beijing seeks to cooperate with the new Afghan government on targeting Uyghur extremists. 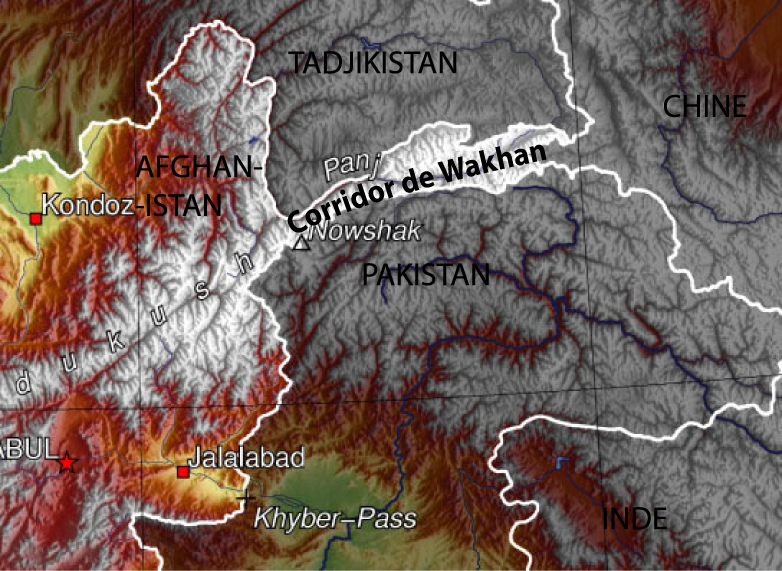 China has a short 76-km (47-mile) border with Afghanistan at the end of the narrow Wakhan Corridor, crossed by several mountain passes (Image: Captain Blood, CC-BY-SA 3.0).

"This decision to build and jointly staff a facility is one of only a few known examples for China around the world," Raffaello Pantucci, a senior associate fellow at London's Royal United Services Institute, told RFE/RL. "The fact that we keep seeing this activity in Tajikistan shows the level of Chinese concern towards Afghanistan and the region."

China's anxieties over Afghanistan becoming a breeding ground for growing terrorism relate to the separatist East Turkistan Islamic Movement, which has been blamed for attacks in China's Xinjiang province. Beijing worries that jihadists in Afghanistan could attach themselves to the East Turkistan cause.

Tajikistan is also home to Russia’s largest military base abroad—Russia remains worried about terrorist infiltration in its Central Asian “backyard” following the Taliban’s swift takeover of Afghanistan following the withdrawal of the US-led forces that were present in the country for more than two decades. The Russia-led Collective Security Treaty Organization (CSTO), a Eurasian defence alliance, has conducted a number of military drills within Central Asian nations that border Afghanistan.

The Tajik government has been taking a hard stance against the Taliban government in Afghanistan as Tajikistan is worried about the treatment of the Tajik minority, which makes up around 30% of the Afghan population. The Taliban, in contrast, is mainly made up of the Pashtun group, which accounts for 40% of Afghan citizens. Tajik officials have called for an all-inclusive government in Afghanistan instead of one dominated by Pashtuns. Iran is likewise anxious over the future of Shi’ite Persian-speaking minorities in Afghanistan, such as the Tajiks and the Hazaras, under Taliban rule.

There has been no sign, meanwhile, of the US managing to persuade any of the Central Asian nations to host an American military base in the wake of Washington’s Afghanistan exit. Russia, which wields a major influence over its former Soviet colonies in the region, remains firmly against any Nato or US presence in Central Asia. Washington has said it needs to maintain the ability to conduct "over the horizon" strikes against evolving terrorist threats in Taliban-run Afghanistan.

The US defence establishment this week warned that the Afghan branch of Islamic State, namely Islamic State Khorasan Province (ISKP), might develop the means to launch terrorist attacks on the US by next year and that Al-Qaeda in Afghanistan would likely have such means in one to two years. The US is thus examining ways of maintaining “over-the-horizon” military capacity to strike at evolving terrorist threats in Afghanistan and is thought to have explored any potential for placing military assets or bases in Central Asian countries that could be used in strikes on Afghan targets.

In June, Russian President Vladimir Putin offered Washington the use of Russian military bases in Tajikistan and Kyrgyzstan, according to Kommersant newspaper's sources.

Officials offer 2% “conversion support” to exporters who surrender more of their FX earnings.