VISEGRAD BLOG: Putin’s cost of living crisis has already caused mass demonstrations in Europe, but will they get worse? 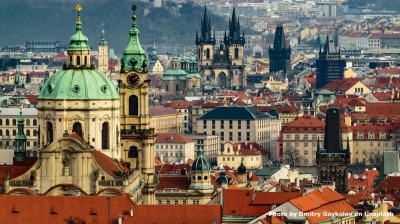 The cost of living is soaring across Europe and the first protests have appeared calling for an end to the war. Will they spread? / bne IntelliNews
By Ben Aris in Berlin September 8, 2022

Last weekend 70,000 protesters gathered on Wenceslas Square in the heart of Prague to demonstrate against the rising cost of living and demanded a rapprochement with Russia that will provide access to cheap gas.

Millions of Europeans could be plunged into poverty this winter as they are forced to choose between “eat or heat” by the double whammy of rising food and energy bills. The rising cost of living crisis is putting more and more pressure on governments across Europe and Russian President Vladimir Putin is using his most powerful weapon – control of commodities – to undermine popular support for the war in the clash between East and West.

EU Commissioner for Economy Paolo Gentiloni said in an interview with Der Spiegel that Europe needs to brace itself for "one of the worst winters in history."

"No one can rule that out. The current inflation will throw our economy into turmoil, and the coming winter could be one of the worst in history. We are experiencing unprecedented uncertainty. But the figures for the EU economy as a whole are still positive, and the situation on the labor market is good," he said.

Inflation and energy prices in the UK are at multi-decade highs and the highest in Europe, despite the fact that the foggy Albion is the least dependent on Russia fuel on the Continent. Bills are literally becoming unaffordable. Businesses are being forced to close down. As bne IntelliNews has reported, a rash of steel mills, fertiliser plants and aluminium producers have already been forced to close due to unaffordable energy bills, and even one of Germany’s most famous toilet paper makers just filed for bankruptcy after its business ceased to be viable because of rising costs.

The newly selected British Prime Minister Liz Truss had a very rocky first day on the job in Prime Minister’s question time on September 6, where she faced a barrage of questions on how she was going to deal with the ballooning crisis. Truss has come up with a massive GBP130bn ($149bn) spending plan to alleviate the pain. German Chancellor Olaf Scholz was forced to make the same move a week earlier, rolling out a third €65bn relief package to deal with the cost-of-living crisis that is twice as large as the previous two combined.

Europe has already spent over €300bn on relief and subsidies so far, but that cost will certainly rise to around half a trillion by the end of the year and possibly as much as €1 trillion by the start of spring next year unless something changes.

Populations across the region are approaching a breaking point. The protests started in the poorest countries in southern Europe as those populations rapidly reached the limit of what they could afford. Rising costs, especially the cost of food, are plunging millions into poverty as citizens have to choose between “eat or heat?” Residential energy and fuel bills have doubled or more since the start of the war that will push 4mn Britons into “fuel poverty” after prices are hiked again in October.

A worsening cost-of-living crisis across Europe has already seen workers in France, Spain and Belgium go out on strike in the public transport, health and aviation sectors, pushing for higher wages to help them cope with rocketing inflation.

The first protests related to unaffordable costs of living were in Albania shortly after the war started, one of the poorest countries in Europe, when several hundred protesters gathered outside the prime minister’s office in Tirana on the evening of March 9. Consumer price inflation had just reached a 10-year high. (Another problem is that inflation was already rising before the war in Ukraine and governments’ balance sheets were already weakened by the coronavirus (COVID-19) pandemic spending.) By the next day the protests had spread across the whole country as demonstrators demanded the price of fuel be brought down.

Now dissent has spread to Europe’s heartland for the same reasons as life is becoming unaffordable for richer Central Europeans.

Inflation in Czechia is also at record levels. In August it hit an eye-watering 17.5%, its highest level in three decades. The soaring cost of goods is made doubly painful by the 9.8% fall in real wages in the second quarter of this year. Indeed, wages are not keeping pace with inflation in all of Central Europe, which is just about to go into double digits everywhere, according to the Institute of International Finance (IIF).

Poignantly a similar demonstration took place in Cologne on the same day, where several hundred people came out to call for the same demands.

So far, these Western European protests have been limited to fringe groups and pro-Russia supporters that may have been egged on by the Kremlin, but the danger is it spreads to the general population.

In Prague the protest, entitled “The Czech Republic first”, was organised by groups previously active in anti-vaccine demonstrations and included representatives of Tomio Okamura's far-right Freedom and Democracy party (SPD) and the largely unreconstructed Czech Communist Party. But with parliamentary elections in September and presidential elections in January, the energy crisis is already having an impact on local politics.

Ethnic Russians living in Germany made up a large share of the Cologne protests.

German Foreign Minister Annalena Baerbock is clearly worried about the impact of the crisis on German politics. She said unless the government can effectively contain the soaring cost of living, political support for Ukraine in its struggle against Russia will become politically impossible.

In an interview talking about the gas crisis after Russia reduced the flows through Nord Stream 1 due to a faulty turbine she said: “If we don’t get the gas turbine, then we won’t get any more gas, and then we won’t be able to provide any support for Ukraine at all, because then we’ll be busy with popular uprisings.” She immediately backtracked but the damage was done. Baerbock followed her comments by saying that she had been “exaggerating,” and she repeated this later, also stressing the high level of public support in Germany for arms deliveries to Ukraine, but the German government is clearly concerned with the possibility of a political backlash against its support for Ukraine if it can’t contain the rises in the cost of living.

For the meantime Europeans are continuing to support Ukraine so the chances for mass protests remain latent. As of June-July 2022, a poll by Eurobarometer public survey showed that 92% support humanitarian aid, 90% support providing shelter to Ukrainians who travel abroad, and 78% favour economic sanctions against the Russian elite and businesses.

Also, 68% of respondents support Ukraine's funding from the European military aid budget. Moreover, 57% of respondents are satisfied with the reaction to Russian aggression against Ukraine at the EU level and 55% at the level of national governments. 86-87% of respondents agree that EU countries must invest more in "green energy" and reduce dependence on Russian gas.

But the same is not true with the population’s view of Scholz and how his government is handling the crisis. A record two thirds of Germans are unhappy with the performance of Scholz and his fractious coalition according to a poll released last week. Another 62% said that he was doing his job badly – another record.

Putin’s ability to manipulate the prices of major commodities means that he is likely to be able to keep prices high for the rest of the winter and so pressure on Western political leaders. Gazprom has now turned off Nord Stream 1 completely and Putin said at the Eastern Economic Forum in Vladivostok this week that it is likely to be off for good.

Moreover, a new crisis is in the offing: the G7 ministers agreed last week to try to implement an oil price cap scheme that will limit the price Russia can sell its oil for. However, the scheme turns on the assumption that Russia will be prepared to sell its oil at below market rates as it is desperate for cash. Putin said in Vladivostok this week that Russia will simply not sell its oil in this case. Taking the approximately 2mn bpd Russia exports to Europe off the market is likely to cause an oil price shock that will send prices rocketing, adding to the already historically high prices for gas. That amount of oil will be very difficult to replace, as the Kingdom of Saudi Arabia (KSA) has already said it doesn’t have much spare production capacity left. Iran is one of the few countries that could step into the gap, but it currently remains under sanctions too.

The crisis has not reached its peak. Much remains unknown. Ukraine's counteroffensive in Kherson made significant progress in the last 24 hours and there is a chance that Russia’s military campaign may collapse suddenly. The effectiveness of the oil price cap scheme also remains unknown and that too could have a dramatic effect, possibly leading to a Russian financial crisis. But if things remain as they are the outlook is for a cold hungry winter that will do significant damage to economies across the EU.