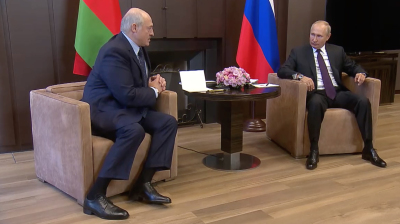 Lukashenko meeting with Putin in September 2020 to ask for money and political support as anti-regime protests were in full swing across Belarus. / Getty Images
By bne IntelliNews September 16, 2022

On September 13, Russia and Belarus signed a draft agreement on a general harmonisation on the collection of the value-added tax and excise duties. This was reported by the Belarusian government on its website.

The chairman of Belarus’ state oil concern Belneftekhim, Andrei Rybakov, announced in late August that Belarus and Russia were working to create a common oil market within the framework of their Union State agreement. According to Rybakov, the drafting of a common oil market would make it necessary to adopt all 28 programmes in the Union State agreement and an intergovernmental agreement on the oil market is planned to have been created by mid-2023.

According to Belarusian State Media outlet BelTA, Belarus and Russia are working to bring their tax legislation on VAT and excise duties into compliance with their draft agreement by January 1, 2023.

The agreement provides for the creation of an integrated administrative system for indirect taxes, which will store information about the purchases of Belarusian and Russian VAT payers. The system will only collect data on VAT-payers who are registered with Belarusian or Russian taxation authorities from 1 January, 2023.

Furthermore, the agreement keeps the rates of excise duties on the listed goods and services from falling below the rates; it stipulates a common list of operations that are exempted from VAT or subject to lower VAT rates; lastly, the agreement also calls on the creation of a supranational tax committee, which will see to it that both sides follow the agreement.

This agreement is a part of Belarus’ and Russia’s realisation of their 28 Union State programmes which were approved by Lukashenko and Putin last Autumn.

Since a Union State agreement was first signed in 1999, Minsk and Moscow have been trying to define the precise nature of their Union. Moscow has been pushing for stronger political and economic integration between the two countries, even envisioning the creation of a potential ruble zone. However, Lukashenko only signed the agreement for the same reason as he joined the CSTO and EAEU, to cater to Moscow in order to receive lower energy prices.

Up until 2020, Lukashenko skilfully played out Russian and Western interests against each other to receive concessions from both; when his power was really threatened by domestic protests against falsified election results in 2020, Lukashenko realised there was no turning back to the West. Minsk then went on a domestic political repression frenzy, severing more and more ties with the West. After admitting Crimea to be Russian in autumn last year, Lukashenko even took the final step to sever all relationships bar diplomatic ones with Ukraine after aiding Russia in its invasion this year.

As a result, Lukashenko barely has any allies left but Putin. While he may have political allies such as Beijing and other CSTO and EAEU member states, there’s no one but Moscow who has the power or the will to prop up his centrally run economic model materially.

The unity within CSTO is also cracking, as no member state is in any immediate rush to help Armenia fight Azerbaijan. Instead, Minsk simply urges both sides to show "restraint" while focusing on boosting its heavily sanctioned forestry industry by exporting timber to Armenia.

To stay in power, Lukashenko has therefore needed to concede immensely in one of his most hard-fought battles with Moscow, namely on the question of taxation and creation of supranational bodies infringing on his regime’s economic control within Belarus’ borders.

While Minsk has asked Moscow for domestic Russian gas and oil prices, Moscow’s rhetoric hardened around 2015/2016 when it claimed that this could only happen if Minsk agreed to a tax harmonisation. Lukashenko has stalled this last part of the Union Programmes for years and did not seem overly optimistic last year, at least not to the point where analysts believed that he would stop stalling.

Obviously, just as many were surprised about how far Putin was willing to go on Ukraine in February, analysts are time and time again surprised at how far Lukashenko is willing to go. Judging by his previous actions this year – helping Russia invade Ukraine, intensifying domestic political repressions, arresting an EU-diplomat and continuing to menace the EU borders – Lukashenko is more and more putting both of his feet completely on the Russian side.

Letting go of control over Belarusian foreign policy as well as important economic policies to cater to Russian interests will eventually leave Minsk completely at the behest of Moscow. Right now, Lukashenko needs all the money he can get, and he’ll play out all his cards to ensure his own, his family’s and his regime’s safety. The question is, what use will he be to Putin once he has no cards left?