Belarus Corruption Watch: How two businessmen made billions from the “solvents scheme” 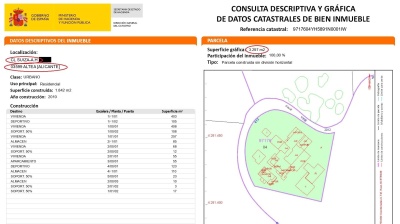 A document detailing the size and location of Tomaševsky’s estate in Spain. / https://investigatebel.org/
By bne IntelliNews November 2, 2022

The partnership of Tomaševsky and Chyzh

Tomaševsky began travelling to Belarus in 2003 and soon became friends with Chyzh, with whom he’d travelled several times to Istanbul, Berlin, Paris and many other cities since 2005.

Already in 2008, the British company Redcast Limited, which is associated with Tomaševsky, became the co-owner of the Belarusian company Prostor-Trade. This company manages shopping centres around Belarus with the stores of Chyzh’s former company ProStore in them. Tomaševsky held 75% of the shares in Redcast Limited as of June 2020. Furthermore, Tomaševsky received a stake in the NefteKhimTrading oil trading company the same year through a British firm named Globecast Limited.

When Chyzh and Tomaševsky met, Chyzh had already earned the trust of Belarusian strongman Alexander Lukashenko; in the early 2000s, his company “Triple” began to replace the previous large players on the Belarusian oil trading market. Chyzh’s good relationship with the Minsk regime was successful, and by the end of the decade his company had expanded into other fields such as pharmaceuticals, residential and military construction and housing, and he even built an ice arena in his native town of Biaroza.

During this time, the Belarusian state awarded Chyzh’s companies with very lucrative deals. In 2007, Triple bought out a silicate products plant with no competitive bidding. Five years later, another of Chyzh’s enterprises, KvartsMelProm, also received the development rights for a sand and chalk deposit in south-western Belarus without any competitive bidding.

Tomaševsky was cut in on Chyzh’s state-sponsored deals. The Danprod pig farm in the Valozhynski district received a state-subsidised loan of nearly €40mn. The main shareholders of Danprod were Vitold Tomaševsky, who up until 2020 owned it through his company Redcast Limited, and Yury Chyzh’s oldest son, Sergei Chyzh.

However, their main business scheme, which even ended up disturbing Belarusian-Russian intergovernmental relations, was the “solvents scheme.” It was through this scheme that Chyzh and Tomaševsky together earned about $5bn through their companies Triple and Savoil.

It was in September 2011 that Belarusian statistics began to record a sudden export boom of “solvents and thinners.” As it turned out, this was simply a relabelling of Russian oil products, which the two businessmen used to get around Belarusian-Russian customs laws.

Only a month prior to this, Tomaševsky had registered his company Savoil LLP in Singapore. According to a source at BIC active in business circles around Chyzh and Tomaševsky, it was through this company which they mainly sold the relabelled oil products. The scheme was highly successful, Savoil had received $800mn in just five months, and by the end 2012 the company was worth $5bn.

The solvents scheme was eventually shut down by then Russian Prime Minister Dimitry Medvedev but caused quite a stir in Minsk’s and Moscow’s relationship. The Russian government declared that the scheme had incurred budget losses of between $700mn-$2bn. But in the end, Minsk somehow managed to ease the tensions. However, Russia brought up the matter again in 2019, using it as an extra trick up its sleeve to put pressure on Minsk for various political concessions.

To this day, Chyzh and Tomaševsky still own NefteKhimTrading together – Chyzh as an individual while Tomaševsky owns it through Globecast Limited. While this ownership can be clearly proved through extracts from the Belarusian Ministry of Justice, Tomaševsky wishes to deny his involvement with Chyzh. When reached for a comment, a representative of Tomaševsky still claimed that the Lithuanian businessman had left all his projects with Yury Chyzh in 2013 and does not have any current relations with him.

How Tomaševsky and Chyzh spent their money

When the solvent scheme was stopped in 2012, Tomaševsky flew from Minsk to a mountain resort in Spanish Alicante for the first time. There, Tomaševsky soon managed to get himself a 3,000-square metre plot with a luxurious villa and a swimming pool. The estate is managed by his company “DOMUS UNIQ SL”, which is valued at $15mn.  Besides this, he has another 3,000-sq metre estate at the foot of the Swiss Alps overlooking Lake Lugano. Similar houses in the area was worth around $13mn.

When he wants to spend time in his homeland Lithuania, Tomaševsky can reside in his 200-sq metre five-room apartment in Vilnius’ old town. The average market value of such apartments is nearly €500,000.

Tomaševsky acquired his Swiss estate already in 2007, but he acquired his Spanish estate and his apartment in the Vilnius old town in 2014, two years after the solvent scheme had been ended.

However, Tomaševsky has not only focused on buying estates and apartments throughout the years. In 2016, a Boeing-737 was registered under a company owned by Tomaševsky, Hansel Jet Ireland Limited. Today, this type of jet costs around $90mn.

Even as Chyzh has managed to retain and secure most of his wealth, Lukashenko has ensured that pressure has been put on him. In March 2016 he was arrested by the Belarus’ security service KGB, was charged with large-scale tax evasion, forced to pay $11-12mn in damages and was released six months later. In March 2021 he was arrested once again on a new case of tax evasion, and was only released through a pardon in September this year.

Nevertheless, Chyzh has managed to secure his assets by putting them in the hands of trusted people around him. One of his unfinished tourist complexes was bought by a company associated with his compatriot Anna Popova. Popova also owns a company that rents filling stations from NefeKhimTrading, owned by Chyzh and Tomaševsky. Moreover, Popova also owns Chyzh’s previous company, Prostore.

While Chyzh’s eldest son runs the Danprod enterprise, his youngest son Vladimir owns the TriplePharm, which produces antibiotics. Chyzh’s daughter Tatsiana owns a large restaurant-brewery in Minsk, while the ownership of his two-story cottage in Belarus worth around $720,000 was transferred to his daughter-in-law before he went to prison in 2021.

This investigation further details the extent of corruption related to Lukashenko, as well as the width of corruption within business circles between Belarus and the Baltics. Previously, bne IntelliNews has reported on four other investigations made by BIC and its partners, the last of which covered the Karić family’s business schemes with Lukashenko and his family.