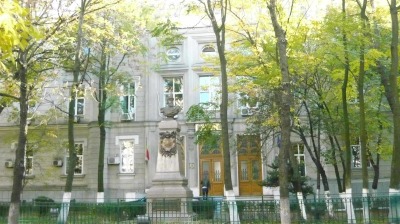 The headquarters of Romania's National Anticorruption Directorate in Bucharest.
By Clare Nuttall in Glasgow September 19, 2021

Since coming to power in the July 2021 general election, Moldova’s Party of Action and Solidarity (PAS) has sought to make far-reaching anti-corruption reforms. To achieve this, the new guard in Chisinau are looking for inspiration from neighbouring Romania, where the National Anticorruption Directorate (DNA) embarked on a bold effort to bring top officials to justice under its former head, Laura Codruta Kovesi.

Even though Kovesi was removed from the helm of the DNA in 2018, with relatively few true success stories in the fight against corruption in emerging Europe the years during which the Romanian agency brought numerous current and former officials to book remain one of the few shining lights of the anti-corruption struggle in the region.

The month after she was elected in December 2020, Moldovan President Maia Sandu flew to Brussels for meetings with officials including Kovesi, now the first chief prosecutor of the European Prosecutor's Office. Back in January, there was little Sandu could do to pursue her reform agenda, as the parliament remained dominated by former president Igor Dodon’s Socialists and other opponents of the PAS. As she noted at the time: “The EU wants to help us, to support the development of the Republic of Moldova, but it needs reliable partners here.”

That all changed in July, when the general election resulted in a landslide victory for the PAS, finally allowing Sandu and her colleagues to embark on the wide-ranging overhaul of judicial institutions, which had been captured to a large degree under Moldova’s former pre-eminent politician Vlad Plahotnuic, then staffed with some new political appointees under Dodon. As reported by bne IntelliNews, the chapter on justice reform in the ruling strategy document published by Moldova’s new Prime Minister Natalia Gavrilita clearly incorporates the experience Romania gained in the fight against corruption.

In the two months since the election, legislation putting in place new procedures for the evaluation of the head prosecutors has already been promulgated with the aim of a quick replacement of general prosecutor Alexandr Stoianoglo, a Dodon-era appointee. A key step in the overhaul of the judiciary is replacing Stoianoglo and other top prosecutors. Both the General Prosecutor's Office and the National Anticorruption Centre (NAC) have been strongly criticised by MPs for their lack of progress on recovering the money stolen in the so-called $1bn bank frauds.

Under previous regimes, corruption, both petty and on a grand scale, had been able to flourish in Moldova. The $1bn bank frauds involved the siphoning off of funds amounting to around 12% of Moldova’s entire GDP, but this was just one example of many, albeit on a large scale. Corruption is a problem across almost all of the former socialist space and Romania too was notoriously corrupt until the DNA’s aggressive pursuit of justice made it a dangerous activity to engage in.

Under Kovesi, the DNA investigated numerous serving and former ministers and other high-level officials, and was credited with making a real difference in the fight against corruption in Romania. In 2017 alone, the DNA sent 997 defendants to trial, including three ministers, a former parliament speaker and six MPs. The number of cases completed by DNA prosecutors increased by 16.5% year on year to more than 3,800 the same year. Kovesi herself became an icon of the struggle against official corruption.

However, this brought the DNA chief into conflict with the leaders of the then ruling Social Democratic Party (PSD), who sought to discredit her and remove her from the position. Despite mass protests and criticism from Romania’s international partners, they eventually succeeded.

The DNA is still investigating but no longer with the vigour it had under Kovesi. The annual Cooperation and Verification Mechanism(CVM) reports issued by the European Commission on Romania’s process in fighting corruption reflect this. The 2018 report, issued after Kovesi’s dismissal, concluded that “developments had reversed or called into question the irreversibility of progress” in Romania. The October 2019 report welcomed the “intention of the Romanian government to reset the approach”, but pointed out that Romania did not engage with all the recommendations. Similarly, it pointed out in 2020 that “overall progress was limited”. A further setback came this autumn, when Justice Minister Stelion Ion of the reformist USR-PLUS was sacked, leaving reforms in limbo.

More recently, Bulgaria, like Romania, was racked by mass anti-government and anti-corruption protests, first in autumn 2019 over the appointment of Ivan Geshev as chief prosecutor, and later for several months in the summer and autumn of 2020.

At a protest in October 2019, bne IntelliNews’ correspondent in Sofia reported seeing one old man holding a poster calling on Kovesi, then newly appointed as the European Union’s top prosecutor, to help the country.

It hadn’t always been like that. Back at the start of former prime minister Boyko Borissov’s third term in power, it was the government that was inspired by the Romanian experience to launch a new anti-corruption effort. Announcing the launch of a single authority to tackle corruption in 2015, then deputy prime minister Meglena Kuneva said the new agency would be responsible for investigations into over 7,600 senior government officials and magistrates.

Instead it has been the caretaker government, appointed after the failure to form a new government following this year's April general election, that has been highly active in its efforts to bring members of previous administrations to book for corruption. Numerous suspected corruption schemes have been revealed, including that the former government led by Borissov signed contracts worth billions of levs without calling public tenders. Their efforts made the government the most popular in decades, and having built their reputations, two of the most high-profile ministers have now stepped down to run in the November general election.

Success stories in fighting corruption in the emerging Europe region are quite rare. In Southeast Europe almost every country has stagnated or dropped its score on Transparency International’s Corruption Perceptions Index (CPI) in recent years. Where there have been reforms, they often get reversed or undermined – just as Kovesi’s success at the head of the DNA in Romania ultimately led to her removal from the post.

One of the most notable examples is in the South Caucasus, where Georgia was once seen as the standout success story of the former Soviet space after the Baltic states. When he came to power after the Rose Revolution, ex-Georgian president Mikheil Saakashvili’s government embarked on far-reaching anti-corruption reforms, including the wholesale sacking of police officers and interior ministry employees, followed by the creation of a smaller police force virtually from scratch. This eradicated most of the visible signs of small-scale corruption affecting the person on the street.

However, by the end of Saakashvili’s second term, international observers including Transparency International warned that he had allowed high-level graft to re-emerge. Since then, according to the corruption watchdog, anti-corruption efforts in the country have stagnated. Under Georgian Dream, which ousted Saakashvili’s United National Movement (UNM) from office, several high-ranking former officials from the Saakashvili era were convicted, but according to a recent report from the watchdog, aside from this “the anti-corruption efforts of Georgian Dream more or less ceased”. As bne IntelliNews has argued, “the track record for colour revolutions is actually very poor.”

Attention has since turned to neighbouring Armenia, home to its own velvet revolution, when mass protests forced out former president and prime minister Serzh Sargsyan. His replacement as prime minister is former journalist and protest leader Nikol Pashinyan, whose Civil Contract Party recently won a resounding victory in the June general election. For voters, memories of the decade of corrupt and authoritarian rule under his main rival Robert Kocharyan clearly outweighed the disastrous defeat in last year’s war with Azerbaijan under Pashinyan.

The populations of countries across emerging Europe have clearly shown their interest in combating corruption, whether on the streets or at the ballot box. However, lacking strong institutions to keep a check on corrupt behaviour, most of the success stories are still the result of efforts by bold individuals, making them vulnerable to reversal.

bneGREEN: Brussels labels both gas and nuclear as green