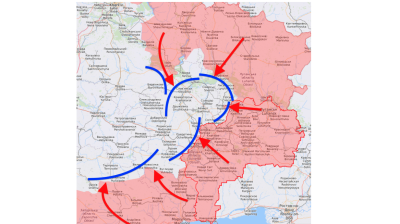 Russia is playing the "food card" as the EU rolls out the first oil sanctions. Is a ceasefire soon possible? / wiki
By Chris Weafer of Macro-Advisory in Moscow May 31, 2022

The Kremlin’s priority is to get full control of Donbas. The military action and statements by senior Russian officials suggest that Moscow is now entirely focused on gaining full control of the Donbas region as quickly as possible. The fate of the Donbas will be the most difficult part of peace talks.

Playing the “food-card”. Officials say that Russia is not attacking the port of Odesa to use this food export route as a bargaining chip when peace talks start. This is also confirmed by President Putin. President Zelenskiy is also pushing the threat of global food shortages as part of the pressure on the US and the EU to maximise pressure on Moscow to end the fighting and start talks.

The EU agrees the sixth sanctions package. EU leaders managed to reach a compromise which will allow the import of Russian oil via the Druzhba pipeline (to Slovakia, Hungary, and Czechia), but which will phase out all other oil and product imports by year end. The total potential loss to Russia is $20bn but Moscow now has six months to find alternative buyers for this oil in Asia and Africa. In recent weeks, Asia has become the biggest buyer of Russian oil, with volumes shipped more than three times the volume shipped in February. The sixth sanctions package also bans trade with Sberbank (SWIFT exclusion) and adds more individuals to the EU sanctions list.

Ruble is too strong. The ruble traded in the mid-50s versus the US dollar early last week before the CBR took action to pull it back to the mid-60s. The Finance and Economy Ministers are complaining about the excessive strength of the ruble. The Economy Ministry forecasts a year-end rate at RUB77/$.

First evidence of deflation. RosStat reported the first drop in prices since August 2021 – due to a decline in food prices as Russians switch to domestic grown produce.

Technical default clock is again ticking. The government will be able to pay euro and sterling commitments but no longer US dollar payments. There is a question mark over payments made ahead of the May 25th deadline or otherwise; the next dollar payment date is late June.

Question marks over LNG 2 ... There are reports (unconfirmed) in Chinese media that China suppliers are unable to complete equipment orders for LNG-2. If that happens, this project will stall until either sanctions ease or Novatek can find a new supplier.

.... and delivery of icebreakers. Korean shipyards are reported to have stopped supplying some equipment for the icebreaker programme. This will delay the plans for operating the Northern Sea Route (NSR) on a 12-month basis.

Novy-McDonalds to re-open on Russia Day. The new owners of the McDonald’s franchise say they will re-open the Pushkin Square outlet on June 12th with a yet-to-be-announced new trading name. The symbolism is important, as this was the very first McDonald’s outlet opened in the Soviet Union and June 12 is the Russia Day national holiday.

Turks are rightly proud of the success of Bayraktar drones in the conflict in Ukraine and Ukraine was grateful, but now they are not so sure as Turkish President Recep Tayyip Erdogan plays both side of the fence.

HESS: West wins the default battle but the economic war must go on

The Russian Federation has defaulted on its debts, failing to pay interest on a pair of Eurobonds within their 30-day grace period that ended on 26 June – another blow struck against Russia in an escalating economic war.

Many economists are of the opinion that the US Fed has had a pretty abysmal track record in forecasting inflation during past years. It first deliberately changed policy to allow inflation to run hot at higher than 2%, but now it's too high.

On June 13, Ukrainian presidential advisor Mykhailo Podolyak named the specific amount of Western weapon supplies Ukraine needs in order to “end the war” and “kick Russia out of Ukraine”: 1,000 155-mm howitzers and more.

COMMENT: Sovereign Sustainable bonds fit the Ukraine refugee crisis funding needs
4 hours ago
ASH: Turkey playing a delicate balancing act between Ukraine, Russia and NATO
1 day ago
HESS: West wins the default battle but the economic war must go on
2 days ago
NEMETHY: Is the US Fed playing with the wrong levers?
2 days ago
Ukraine has been clear that it needs more weapons from the West. So, what’s the holdup?
5 days ago