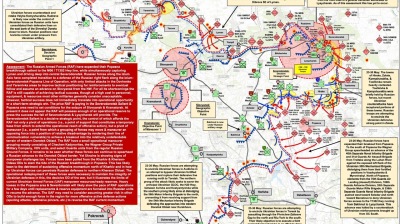 Positions of Russian and Ukrainian forces in the Donbas. / ISW
By Dominic Culverwell in Berlin June 2, 2022

Russia’s intense focus on capturing cities in Eastern Ukraine, particularly the major assault on Severodonetsk, has left the Kherson region vulnerable to Ukrainian counter-offensives, the Kyiv Independent reported on June 1.

According to the US think-tank Institute for the Study of War (ISW), Ukrainian forces are withdrawing from Severodonetsk where Russia controls 70% of the city in a “largely symbolic” gain. Instead, Kyiv has recognised Russia’s vulnerabilities in Kherson as the majority of Russia’s forces are currently located in the Donbas region.

“Continuing successful Ukrainian counter-offensives in Kherson indicate that Ukraine’s commanders recognise these realities and are taking advantage of the vulnerabilities that Putin’s decisions have created,” ISW stated. “Both the decision to avoid committing more resources to saving Severodonetsk and the decision to withdraw from it were strategically sound, however painful”.

Although Severodonetsk is not yet fully surrounded, the city is likely to fall under Russian control soon in what will be a big “morale boost” for Moscow but not a major strategic victory, according to the regional governor Serhiy Hayday in an interview with Sky News. However, Russia is close to gaining control over all of the Luhansk region. This could be the moment to pause, with Russia claiming victory over Donbas, and the potential return to peace talks whilst fighting simmers down.

Although Ukraine continues to conduct successful counter-offensives in north-west Kherson, the US State Department warned about Russia’s “attempts to institutionalise control” over the strategically important region in a press conference on May 31. Ned Price, the State Department spokesman, mentioned Russia is likely to take one of two possible steps: recognising a Kherson People’s Republic, similar to the Donetsk and Luhansk People’s Republics; or the annexation of Kherson.

Holding on to Kherson gives Russia a strong position to launch a future invasion against Ukraine as well as control over the freshwater supply to Crimea. Ukraine cut off the canal in the Kherson region after the 2014 annexation which supplied 85% of Crimea’s water needs.

But if Kyiv regains control over the region, that could spell a Ukrainian victory by demoralising Russian troops and putting Ukraine in a strong position to defend itself against future Russian attacks.

The ISW believes Ukraine has a good chance at countering Russia’s attacks and could “reverse the gains Russia is currently making”. As an example of Ukraine’s success, the think-tank points to Kharkiv where Ukrainian forces pushed Russian troops “almost out of artillery range of Kharkiv City”.

In the meantime, life in the Luhansk region continues to struggle on, with no water or electricity and a constant barrage of bombs and shelling. In Severodonetsk, Russia has decimated critical infrastructure with 90% of residential buildings left damaged, replicating the destruction suffered by Mariupol.

"Russians have destroyed all electricity and water substations. People have no water. They shot main gas pipes, they destroyed all our hospitals. Many civilians have died”, Serhiy Hayday said.

Evacuations from Severodonetsk were reportedly suspended on May 31 as intensive fighting is now taking place in the streets.

Czech government remains colour blind on green issues
7 hours ago
Poland ups the ante in feud with Brussels over judiciary reforms
19 hours ago
What's the current outlook for Belarus' export sector?
1 day ago
Russian gas exports to Europe tumble in June
1 day ago
Can we trust Russia’s economic statistics?
3 days ago