STOLYPIN: The sick man of Europe 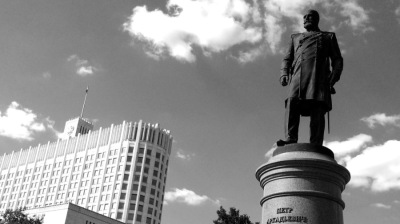 Has Putin gone mad? Is he dying of cancer? He is certainly behaving strangely given his cautious track record. / wiki
By Mark Galeotti May 8, 2022

Is Putin ill? Is Putin mad? Is Putin about to be toppled by a coup? The rumour mill is grinding on overtime, and although most of the lurid claims are implausible to say the least, they do remind us of the absolute centrality of one man in today’s Russia, and how much depends on his fate.

He certainly looks as if there is something seriously wrong with him. The puffy face, the tremors, paranoid biosecurity measures (those long tables…), the news that he is regularly attended to by a senior cancer specialist; all this, combined with the evident differences in his demeanour, have turned everyone on Twitter into a medical specialist. He has Parkinson’s, he has thyroid cancer, he is on steroids – the speculation comes thick and fast.

It may well all be true. Unlike previous bouts of speculation, this seems based on more than just self-seeking rumour-mongering, and is being looked at by government agencies not usually prone to succumbing to hype. But what does it mean?

First of all, it may have a direct impact on his mental and emotional balance and thus his policymaking. This is a system, after all, in which the practical and constitutional checks and balances have been systematically dismantled, leaving very few constraints on the executive. There is a formal basis for impeachment on the grounds of incapacity within the constitution, but this is a complex process that requires majorities in parliament and the Supreme and Constitutional Courts, all of which are packed with cronies, yes-men and careerists.

Could it be that this is the world’s first ‘roid rage’ war, that steroids sufficiently weakened Putin's impulse control to make this habitually cautious leader strike without proper thought of the consequences? Certainly there does seem to have been an otherwise hard to explain absence of serious preparation, and even in those fateful few days between the televised Security Council meeting of February 21 and the invasion on the 24th, he seems to have been flip-flopping between holding back, just seeking to take the Donbas region and imposing a puppet regime over all of Ukraine.

Those who know such things better than me – I am, after all, the ‘wrong’ kind of doctor – say that the medical issues Putin would at least seem to have are unlikely to lead to imminent death or incapacitation. They might well have contracted his timeline, though, explaining quite why he now seems to be an angry old man in a hurry.

However, they might also pose more immediate political challenges. One has to be extremely careful with rumours in the current environment of an active information war, one being fought by Ukraine and the West every bit as eagerly as Russia (and often rather more effectively). Nonetheless, there was an interesting tale, albeit one coming from a Telegram channel of very dubious credibility, that Putin was going into surgery and that Security Council Secretary Nikolai Patrushev would be his interim proxy.

There is much about this that is hard to swallow. Constitutionally, if the president is indisposed, the prime minister stands in. Furthermore, Patrushev – very much the hawk’s hawk – has absolutely no constitutional standing in this context. This would absolutely fly in the face of the constitution, law and established practice and, perhaps most relevantly, also cause problems with the military. The Russian army has a long tradition of remaining outside politics, and the constitutional chain of command is what binds it to the state.

Even if this is just empty scaremongering (because the notion of a Patrushev regency would rightly alarm many in Russia as well as many beyond its borders), it does raise the important question of quite what happens in this personalistic authoritarianism if the monarch is unable to rule for periods of time, yet unwilling to step down. Could Prime Minister Mikhail Mishustin really tell Patrushev and the other hard men of the security services what to do? Would Putin be willing to let someone become considered his virtual heir?

Or, conversely, will Russia end up with a de facto oligarchy, in which Defence Minister Sergey Shoigu and the siloviki fight out their war, Mishustin and the cabinet try to save the economy, and the presidential administration focuses on the political technology? This could work for a while – indeed, in a way this is what is already happening – but what happens when there are disputes which demand the intervention of the ‘decider’?

In those circumstances, the risk is either of paralysis or open political warfare. The Soviet state was, in its own dysfunctional way, able to manage periods of leadership weakness, whether after Lenin’s first stroke in 1922, during Brezhnev’s repeated health problems or Andropov’s year-long period of being General Secretary in dialysis. To a considerable degree, this was because the Communist Party did provide a structure to manage such crises. There is no similar institution today. Putin’s adhocracy has all the back-biting anarchy and unrestricted power of the royal court, without the laws of succession and the informal rules of tradition.

In so many ways, Putin’s system is of the sort that looks ruthlessly powerful and impossible to challenge until suddenly it looks to be neither: there is likely to be no slow, debilitating transition. If something suddenly happens to the ‘old man’ – and it is striking how social media chatter about Putin now tends to frame him in such senior terms, with even his partisans calling him ‘uncle’ – then the future is likely to be shaped by behind-the-scenes conclaves of the great and the not-so-good carving out whatever deal they can. “Let's see who can mobilise first,” wondered Lavrenty Beria in The Death of Stalin, a film that could just as easily prove a future history of immediate post-Putinism.

In the long term, this opens up new questions about the 2024 elections. An ageing, ailing Putin might have envisaged Ukraine as his escape route: one great, glorious victory to carve his place in Russia’s pantheon of state-building heroes, allowing him to bow out on a high note. Now, he no longer has that option. Indeed, he may well have even more reasons to fear not being in charge. Whatever the promises made on retirement, of lifetime honour and immunity, in such a system they are not guarantees – just ask Kazakhstan’s former ‘Security Council Chair for life’ Nursultan Nazarbayev.

On the other hand, if his health situation worsens over the next 22 months, how viable will it be for him to stand again? There is a limit to how far even the modern Russian propaganda machine can maintain the illusion of robust good health, and the magnates of the system will know perfectly well what is going on. So many of our assumptions about the longer-term future of this system depend on medical information we do not know and medical prospects that no one can know.

In the immediate term, Putin’s health matters, too. Regardless of whether some formal or informal regency is instituted, if he is less willing or able to resolve the crucial policy disputes ahead, then this will have serious implications. It will also shape his timeline – if he feels he needs to have something he can call a genuine triumph by, say, the end of summer, then that will incline him to more dramatic and risky moves. On the other hand, if he is less concerned about 2024, then he might not care so much about the consequences of those risks. Of course, those around him with longer timelines in mind may well begin to become even more alarmed by any hint of fatalistic and apocalyptic “après moi, le deluge” on the monarch’s part.

This is all a recipe for intrigue, conspiracy, short-termism and uncertainty. The old notion of kingship was that the health and fate of the monarch and the land were one. Under Putin’s neo-tsarism, the same still seems true.

Decoupling from West to leave Russia as China’s junior partner

With the Ukraine war leading to a long-term economic rift between Russia and West, Russia is set to become dependent on a resurgent China, economists said on a Raiffeisen/wiiw panel.

COMMENT: Sanctions are working, but the West risks isolating Russian reformers instead of galvanising them

As the war rages on, more and more Russians report feeling the effects of sanctions. Under pressure to keep up the impressive rate of new sanctions, the West risks isolating liberal reformers from Russia's business community instead of oligarchs.

NEMETHY: Where are US markets? Where are they heading?

Whereas in previous crises the Fed tried to actively stem crises, currently it seems to be proactively inducing the crisis.

OBITUARY: Former Albanian president Bujar Nishani dies at 55
5 hours ago
Decoupling from West to leave Russia as China’s junior partner
2 days ago
MACRO ADVISORY: Ruble at 5-year high, how strong can it get?
6 days ago
COMMENT: Sanctions are working, but the West risks isolating Russian reformers instead of galvanising them
10 days ago
NEMETHY: Where are US markets? Where are they heading?
10 days ago