BALTIC BLOG: From the Aegean to the Gulf of Finland, China cements its presence across Eastern Europe 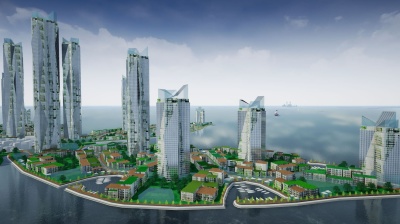 An artificial island will be part of the massive development linking the capitals of Estonia and Finland. / FinEst Bay Area Development
By Clare Nuttall in Glasgow April 3, 2019

The announcement last month that China’s Touchstone Capital Partners plans to extend €15bn to finance the construction of a rail tunnel linking Tallinn and Helsinki highlights how Chinese investment has spread across Central, Southeast and Eastern Europe, especially in the infrastructure sector.

The wider region is part of the Belt and Road Initiative (BRI), launched by Beijing, under which roads, railways and other infrastructure are being built across several continents, in what is seen as a revival of the ancient silk routes between the Far East and Europe.

The countries of Central and Southeast Europe are an important part of the land and sea routes from China to Western Europe. Chinese companies and state banks have committed heavily to the EU member states of Central Europe, as well as investing into infrastructure spanning the Balkans from Greece’s Piraeus Port (controlled by Chinese COSCO) to Central Europe.

The provisional deal between Touchstone and FinEst Bay Area Development, announced on March 8, would put the Chinese stamp firmly on the northern part of the continent as well with what is set to be one of the continent’s largest infrastructure developments.

A statement from FinEst, which is leading the project to build the tunnel, said that Touchstone will make a minority equity investment and is committed to debt financing for the project. One-third of the agreed funding will come as private equity investment and two-thirds as debt financing, the statement said. The details of the funding package are due to be negotiated in the coming six months. This is on top of the relatively small €100mn funding agreed with Dubai-based construction company ARJ Holding LLC in late 2018.

“We are very pleased with the negotiations and the agreement reached. Touchstone has extensive experience in financing similar large private infrastructure projects,” said Kustaa Valtonen of FinEst in the statement.

“Our goal is to also secure European, Nordic and Finnish capital investments in addition to the already agreed financing arrangement. We are looking for a sustainable and fully balanced financing solution for the project,” Valtonen added.

The project has an estimated price tag of up to $23bn, according to Reuters, so it’s clear the lion’s share of funding from the project will come from the Chinese investor assuming the deal goes ahead. This is expected to finally kick start construction of the planned subsea tunnel that has been under discussion for two decades. There are now hopes the tunnel will open as soon as in 2024.

The tunnel will cut the time to cross the Gulf of Finland from two hours by ferry to just 20 minutes. This is important, not least because thousands of Estonians work in the Finnish capital, in addition to the large volumes of tourist traffic from Finland to Estonia. As well as passenger lines, the tunnel will also have freight lines.

Kenny Song, chairman of Touchstone Capital Partners, talked in a statement about creating a “common metropolitan area from the Helsinki and Tallinn regions”, but he also mentioned the wider relevance of the project, as it would give the two capitals “a great opportunity to become a centre of gravity connecting Asia and Europe.”

“The Baltic Sea region is strategically significant for Beijing as it is one of the end point for the Belt and Road initiative,” writes Erik Brattberg, director of the Europe Programme and a fellow at the Carnegie Endowment for International Peace, in a comment on Chinese investments in the Baltic Sea region in February. “Moreover, China sees potential to link the Baltic Sea region to the ‘Polar silk road’ it seeks to establish in the Arctic region to connect European and Asian shipping lanes.”

As the Arctic ice thins, Helsinki has also been exploring the possibility of creating an Arctic Corridor, with a proposal for a $3.4bn project to connect Finland’s Rovaniemi to the north Norwegian port of Kirkenes and onwards to Russia and China.

While the Baltic states are small fry compared to other economies in the CEE region — the smallest, Estonia, has a population of just 1.36mn — Chinese investors have expressed interest in other projects in the region including the Rail Baltica project to connect the three states and a potential container terminal in Lithuania’s Klaipeda port.

“Lithuania, Latvia, and Estonia … realised that their shared traits served as obstacles to cooperation with China: their geographic position (unofficially referred to as the “Baltic cul-de-sac” by Chinese partners), the small size of their domestic markets, and their lack of name-recognition in China,” wrote Una Aleksandra Bērziņa-Čerenkova, head of Riga Stradins University’s China Studies Centre in a 2018 comment published by the US-based Foreign Policy Research Institute (FRPI).

However, this has meant that while larger states in CEE had become frustrated with what some see as the slow pace of investment and concrete returns on their relationship with the emerging East Asian giant — which in some cases such as the crisis at CEFC became mired in controversy —Bērziņa-Čerenkova says the Baltic states are “satisfied with what they have achieved with China”.

“[U]nlike other Central European countries, the Baltic States never had unrealistically high expectations. … Given such low expectations, every positive development—be it cooperation in logistics, a decrease in the trade deficit with China, or an increase in people-to-people exchanges—had the potential to become a success story,” she wrote.

“The Baltic states, however, have accomplished several goals. They have maintained friendly relations with China while upholding the official EU position … On the economic front, they have more than doubled total exports to China, with leading product groups being timber, furniture, machinery and electronics, and mineral products.”

All three states have boosted their exports to China in recent years — though they remain small compared to those of larger economies in the region — while the number of Chinese tourist arrivals has increased strongly.

At the same time, Chinese investment, especially into mega infrastructure projects like the Helsinki-Tallinn subsea tunnel, has a political dimension, given the potential for increased Chinese influence within the eastern part of the EU. Concerns have been voiced about the project in a broad range of quarters — including from Estonia’s outgoing prime minister Juri Ratas, who spoke out on the need for security reviews of the project.

Several CEE countries including the Czech Republic and Romania have warned over the suspected security threat linked to Huawei devices and software. This followed the financial crisis at Chinese investor CEFC and the subsequent collapse of several of its deals in the region, that also raised questions about Chinese influence over top Czech officials. On top of this, a report from Washington-based think tank the Center for Global Development raised the issue of the increasing indebtedness of BRI participating states to Chinese banks, with three Central Asian economies and Montenegro topping the list of states at risk of debt distress from the wider region.

“Across the West there is currently a growing debate over unfair Chinese economic and trade behaviour. These include strategically motivated investments, massive state subsidies, forced technology transfer, and cyber-attacks and espionage,” writes Carnegie’s Brattberg. Elsewhere in northern Europe, Brattberg refers to security fears over planned Chinese investments to build a deep sea harbour in the Swedish town of Lysekil and an airport on Greenland, both of which were eventually halted.

And the launch of such a significant Chinese project linking two countries that have historically been within Russia’s sphere of influence could worry Moscow as well as Brussels and CEE governments. “[S]ome are expressing scepticism about both China’s interest and the possibility that the project will in fact take off,” wrote Paul Goble, a longtime specialist on ethnic and religious questions in Eurasia, for The Jamestown Foundation, citing a raft of technical and political issues. Among these is that, “the project, if completed, would have so many economic and geopolitical consequences that it is certain Moscow will try to shoot it down”.

Meanwhile, Jyrki Kallio, of the Finnish Institute of International Affairs, questioned the rationale for the project in an interview with Finnish newspaper Kauppalehti. While projects such as the high-speed rail link between Belgrade and Budapest has “a clear logic for the Chinese” as it is on the main route from Piraeus to Central Europe, the case for the Helsinki-Tallinn link is less clear as it lacks an “essential connection to the Silk Road Fund”, according to Kallio.

Governments in the eastern part of the European continent have welcomed their increased relevance to Beijing and the consequent inflows of investment, which in some countries exceeds inflows from the EU. Yet mega investments such as that planned for the tunnel are increasingly exciting concerns over their likely consequences in terms of Chinese influence over the region. Future projects are likely to be the subject of increasingly deep scrutiny.

Reflections from our correspondents on the ground in the Baltic states of Estonia, Latvia and Lithuania.