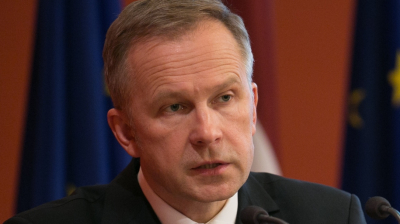 It is commonplace to say “It would make a great thriller!” or “It's straight from the pen of John Le Carre!” but as far as the extraordinary events surrounding Latvian central bank governor Ilmars Rimsevics are concerned, it would rather take a Zola or Trollope. This is much more "The Way We Live Now" or "L'Argent" than "Tinker, Tailor, Soldier, Spy" – though rich men, poor men, beggar men and thieves are also involved in the supporting cast.

In brief: Rimsevics was arrested by KNAB anti-corruption officers after returning from a quick trip to Spain on February 17. He was held for questioning the maximum 48 hour term and released – without a formal charge against him but with KNAB saying he is being investigated on suspicion of soliciting a €100,000 bribe from persons unknown but “unconnected with any commercial bank curently operating in Latvia,” (prompting assumptions it may be the now defunct Trasta bank)

In what may or may not be a coincidence, Rimsevics was hauled in almost as soon as Maris Spruds, a prominent figure within the world of bankruptcy administrators (a sector with an extremely dubious reputation) walked out of custody on bail of €500,000 as part of another bribery case involving Trasta. Another businessman and associate of the governor, Maris Martinsons, who runs an instant loan company, was arrested shortly before Rimsevics and subsequently released as part of the same investigation.

But these events were merely the introductory preface to the dramatic action of February 19 and 20 on which, in rapid succession, the Anglo-Russian owner of Norvik bank [full disclosure: bneIntellinews has an account with the bank] Grigory Guselnikov named Rimsevics as the official who had solicited another bribe of €100,000 per month. Norvik was already taking Latvia to international arbitration, claiming unfair treatment, but until that point had never named the official it accused.

Guselnikov's accusation came in a sensational Associated Press story which gave another major plot twist by saying that Rimsevics had made multiple low-key visits to Russia during which he had hung out with figures connected to the Kremlin and asking if there might be security implications for a senior official with access to state secrets in a Nato member state. An accompanying photograph showed Rimsevics looking moderately uncomfortable among a gang of laughing Russian fishermen.

So it was with a sense of great anticipation that journalists gathered for Rimsevics' press conference at midday February 20 on a rooftop terrace overlooking the spires of Riga's old town as the bells  chimed ominously in the background.

The press pack, it must be admitted, were not entirely sorry to see Rimsevics in a tight spot: he generally treats the press with high-handed disdain and occasionally likes to indulge in thinly-veiled mockery of their lack of economic expertise. He does, after all, have a degree from a two-year course at St Lawrence University in the US and an MBA from Clarkson University, which ranks as high as 124 among US universities. The reaction from pretty much anyone who has ever interviewed Rimsevics to the news of his detention was the same: “Couldn't happen to a nicer guy”.

Unlikeable and out of touch

Recent appearances on Latvian Radio and at a meet the public event in the northern town of Valmiera were typical: not a word about non-resident banks, plenty about increased productivity and controlling wages (he is one of the highest-paid officials in the country) and seeming surprise that the great unwashed were themselves more keen to talk about how they struggle to get by using loosely-regulated and exploitative payday loans (the above-mentioned Martinsons runs an instant loan company). However, being unlikeable and out of touch with ordinary folk is not evidence of guilt.

But back to our story. A conventional scandal narrative at this point would have had Rimsevics briefly denying the allegations then saying that with a heavy heart after 17 years in the job he was temporarily standing aside to clear his name. Instead we got him saying “I'm not stepping down because I'm not guilty,” denying all accusations against him and going on the counter-offensive by accusing Guselnikov and Norvik of orchestrating an attempt to unseat him (in cahoots with another lender, ABLV bank, but that is a parallel sub-plot we do not have room for here) because Norvik is losing money and wants to squeeze money from the Latvian state. It amounts to “a coordinated campaign by some of Latvia's commercial banks with the purpose of discrediting the Latvian state," he said.

At this point it may be worth mentioning that the independent governing council of Norvik bank includes former Nato Secretary General Anders Fogh Rasmussen and former head of the German intelligence service August Gustav Paul Hanning.

The fishing trips to Kamchatka? Just salmon fishing trips on which you get met by a bus at the airport and billeted with a load of people you don't know, he said. That line of defence was repeated on a late-night interview show, along with a suggestion that he had been targeted because he has been a leading force against the non-resident banks – a claim that does not hold enough water to catch a salmon. It is difficult to think of a speech he has made calling for the sector to be sorted out as a matter of urgency despite a veritable pile-up of money-laundering scandals over a decade.

The central bank these days likes to think of itself as a think-tank and has been offering unsolicited advice to government on healthcare, tax and education, but nothing on corruption. It is true that the central bank does not have direct oversight of financial institutions, but the governor does nominate its head – current regulator Peters Putnins was a consultant to the central bank from 2005-12.

Just as things started to settle and we began to anticipate the awkward silence when Rimsevics rocks up to his next session on the governing council of the European Central Bank, in blunders comic relief in the Falstaffian sword-waving figure of the Defence Ministry with a warning that Latvia is probably subject to “an outsourced large-scale information operation” based on an “analysis” of outlets reporting the Rimsevics affair that would embarrass a seventh-grade media studies class.

The story emanated from a single journalist at Associated Press, the ministry informed, and the controversial picture of the fishing trip did not date from 2010 but had only appeared on Scanpix at around the same time as the accompanying story! And outlets that usually show no interest in reporting on financial affairs or Latvia are suddenly reporting on the Rimsevics affair! These sinister disseminators include The Fresno Bee, Idaho Press and the North Platte Telegraph. “All this suggests that this is probably a very large-scale information operation to defame the image of Latvia in the Western countries and to undermine the public's trust in the state,” the ministry thundered.

Clearly, bneIntellinews does not have the sophisticated “analysis” tools of the Defence Ministry at our disposal, but we do have a certain amount of experience in how the media works. It is not particularly unusual for stories and pictures that go with those stories to appear at the same time. Equally, it is not surprising that subscribers to the world's largest newswire, which is particularly strong in the US, run major AP stories as a matter of course. There is even the possibility that some of them may have chosen to do so, not as part of a vast Melmottian consipracy to discredit Latvia, but because the story of a central banker being locked up on suspicion of operating an extortion racket is one that has widespread appeal. If only someone would write the book.

BALTIC BLOG: From the Aegean to the Gulf of Finland, China cements its presence across Eastern Europe

Reflections from our correspondents on the ground in the Baltic states of Estonia, Latvia and Lithuania.