How credible is Putin and Lukashenko's plan to make Belarus nuclear-capable? 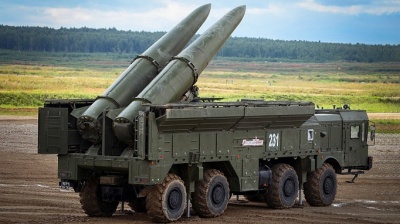 After their meeting on June 25, Putin and Lukashenko announced that Russia would site nuclear-capable “Iskander-M” missile systems in Belarus as well as upgrade Belarus’ Su-25 jets to be able to carry nuclear warheads.

During their meeting, Putin said that Belarus would receive the Iskander-Ms within months, and as the war in Ukraine drags on, many still wonder if Russia will follow through with its promises of making Belarus nuclear capable.

What limitations are there?

The request to make Belarus nuclear capable came from the country's president, Alexander Lukashenko, and this question itself is unsurprising. However, there are certain aspects in Putin and Lukashenko’s announcement that need to be considered when estimating its credibility.

After the fraudulent 2020 Belarusian presidential elections, Lukashenko has become completely dependent on Russia’s economic and political support, even to the degree that many suspect that Belarus could be swallowed up by Russia in the coming years.

The Minsk regime’s decision to push through a new constitutional referendum in February this year led to an elimination of Belarusian neutrality and enabled Belarus to host Russian nuclear weapons.

In his speech to the run-up to Independence Day celebrations in Minsk on July 2, Lukashenko gave the usual explanation for why Belarus needs nuclear weapons, namely, to deter Nato from placing nuclear-capable systems in neighbouring Poland, Lithuania or Latvia.

The removal of the neutrality clause and Lukashenko’s constant warmongering rhetoric against the West should mostly be considered as ways for him to show his loyalty to Putin and doesn’t necessarily mean that the plan will be followed through.

Lukashenko has for many years asked Russia to modernise the Belarusian army’s missile inventory, since its current stock mostly consists of Soviet-era systems. The previous refusals by Moscow have possibly been due to Russia’s limited rocket production for the Iskander-M system and possibly due to a wish from Moscow to maintain the military strategic upper hand against the unruly Belarusian strongman.

The Iskander-M systems have a range of 500 km and would give Belarus a four-fold increase from its current range of 120 km with the Soviet-era Tochka-U missile system. Moreover, the Iskander-M is estimated to be 10 times more accurate than the Tochka-U.

As Nato’s border with Russia expands along with Finland and Sweden’s applications to join the alliance, Russia undoubtedly feels pressed, and may wish to complicate Nato’s defence plans or at least test the alliance's willingness to respond to the threat of making Belarus nuclear capable.

However, if Russia would follow through with its promise, it would most likely not simply give the Iskander-M to the Belarusian army along with nuclear warheads. As Putin’s spokesman Dmitry Peskov pointed out shortly after the announcement, the request concerned the transfer of only the missile system, not the nuclear warheads.

Throughout autumn 2021, Lukashenko repeatedly stated that Belarus would buy Iskander-M systems, or claimed that Belarus already “had” them, when in fact there was only one Iskander system at a military base in Belarus, which was used for training.

Given Minsk and Moscow’s previously ambivalent relationship with each other, it is more probable that Russia would enter a “nuclear basing arrangement” as it did with its Warsaw Pact allies during the Cold War. In this case, Iskander-M systems may be transferred to Belarus and Belarusian soldiers may be trained in using them, but they would still be guarded and operated by Russian soldiers.

If Iskander-Ms are transferred to Russia, the accompanying Russian troops would most likely be there to stay, and eventually it could even be prelude to a complete military integration of the Russian and Belarusian armies through their “Union State” agreement.

The plan to upgrade Belarusian Su-25s, however, appears less likely to happen given the technical drawbacks of the aeroplane model.

The Su-25 is designed as a close-support aircraft, which means that it would probably only be able to deliver nuclear warheads in free-fall mode, i.e. going downwards without engine power. While this would give it a similar role to Nato’s dual-capable aircraft, the survivability of the Su-25 would, however, be much less than that of Nato aircraft.

Belarus also has four Su-30 SM Flanker H aircrafts that would be much better to upgrade to nuclear warhead carrying capability since they have a longer range, larger payload and have a better flight performance.

Therefore it appears more likely that Putin and Lukashenko were looking to send a strong signal to the West rather than follow through with the Su-25 upgrades.

So far, the communication has been scarce; apart from their joint announcement on June 25, neither Putin nor Lukashenko has mentioned the matter in any further detail. Russia’s capability to divert Iskander-Ms to Belarus simply as deterrent measures also appears quite low given that US intelligence estimates that Russia has already committed 85% of its forces to Ukraine and the current poor state of its military-industrial complex following the Western sanctions.

Ultimately, therefore, the announcement does not appear that credible, but nevertheless remains possible.

Since Lukashenko is still hesitant about directly involving the Belarusian army in Russia’s invasion of Ukraine, it would make little sense for Russia to: 1. Give or sell Iskander-Ms to Belarus; 2. To retrofit the Su-25s to be nuclear capable given the model’s limitations in this role.

More likely would be that Russia would transfer Iskander-M systems along with Russian personnel, perhaps as a prelude to further military, political and economic integration of the two countries.