Minsk switches its rhetoric in fear of a domestic political revival 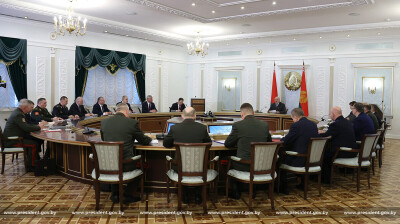 The meeting of Belarus' Security Council on 7 April. / president.gov.by
By bne IntelliNews April 10, 2022

Speaking at a meeting with Belarus’ national security council on 7 April, Belarusian strongman Alexander Lukashenko demanded that Belarus be granted a place at the peace negotiations between Russia and Ukraine. At the same meeting, an unexpected change in rhetoric was heard from Lukashenko, who for the first time called Russia’s military aggression in Ukraine a war.

During the meeting with Belarus’ security council on Thursday, April 7, Lukashenko told state media that Minsk does not see itself as an aggressor state like Russia. According to Lukashenko, “we proceed from the belief that this war is just over the fence of our country. And it is most seriously affecting the situation in Belarus. This is why there can be no separate agreements behind Belarus' back.”

After the meeting, Belarusian Minister of Foreign Affairs Vladimir Makei told state media that “we are convinced that security interests and guarantees should be provided not only for Ukraine and Russia, but also for Belarus as one of the three Slavic nations.”

Lukashenko reiterated his position that there was a war going on when speaking to Pakistan’s ambassador to Belarus on Friday, and also added that Belarusians are against wars and always seek a peaceful solution. Nevertheless, Lukashenko emphasised that Russia is a reliable ally, which Belarus will stand beside.

Despite Ukrainian and Western fears that Russia would manage to pull the Belarusian army into its invasion of Ukraine, Minsk has refused to get more involved than it already is.

Minsk most likely recognises what independent Belarusian media as well as US officials have already stated: that there is a strong opposition among Belarusian soldiers and officers to fight against Ukrainians. Furthermore, a recent Chatham House Poll has shown that most Belarusians either want to remain neutral, or even take the side of Ukraine in the conflict.

Under pressure from sanctions and a slow revival of active opposition within the country, Minsk has therefore switched its official propaganda narrative from an escalating war rhetoric into increasingly emphasising the need for peace. Now Lukashenko is also demanding a seat at the negotiating table.

Lukashenko is probably worried about his ability to stay in power, and probably should be. Sanctions are amassing one economic problem after another in Belarus. Most prominent is the upcoming banking crisis.

The sanctions have created a major shortage of foreign currency within the Belarusian banking system, which is creating long lines to the bank branches of people wanting to withdraw their savings. On Thursday, Belarus even announced that it would settle some foreign debts in Belarusian rubles; the same kind of announcement that led Standard & Poor to classify Russia’s foreign currency rating as “selective default” on Saturday.

Inflation is also rising rapidly, with the government having to impose more and more price controls, most recently on toilet paper and nappies. The looming financial crisis is creating discontent among otherwise less politically interested citizens, since everyone is affected by it.

As Bne IntelliNews has reported on before, people in the countryside are getting tired of how the Russian troops are behaving as well. There have been several reports of Russian military trucks hitting civilian vehicles, harassing girls and stealing from farmhouses. People are losing their patience.

As another consequence of these economic problems, we can also discern an increased competition among the ruling elite for dwindling resources. This became especially clear with the arrest of the entire top management of the BelVEB bank, as well as the arrest of the acting general director of Priorbank.

While Lukashenko tries to manage the cracks within the ruling elite and steps up his repression of the general population, the exiled opposition keeps consolidating its position as the legitimate negotiating partner for Belarusians' interests.

Belarus’ role at the negotiating table

In the heat of war there is a risk that only transitional agreements are made. Therefore guarantees for Ukraine concluded right now will be questioned over time, especially when coming from Lukashenko, who most likely just wishes to use such status to regain some sort of relevancy as a regional political actor.

It’s long been obvious that Lukashenko has facilitated Russian military deployment in Belarus to cater to Moscow in order to receive financial and political support. The state media and all state officials have played it down, saying that Belarus is not an aggressor and has only provided its territory for exercises.

However, as a result of the Belarusian regime’s decisions, Belarus is no longer viewed by the West as an independent country, but only as a Russian vassal state. And right now, Lukashenko doesn’t have anything left to offer the West as far as diplomacy is concerned.

Lukashenko will definitely refuse to ease up on his crackdown or release political prisoners, which the West has been demanding since 2020. In fact, political repression is still increasing in Belarus. With imprisoned journalist Kateryna Andreeva almost having finished serving her initial sentence, she was charged with high treason on Thursday and now risks up to 15 more years in prison.

When his power is once again being threatened, Lukashenko feels like he has no choice but to keep the repression high, and he has no interest in catering to the West, while at the same time he demands to be seen as regional guarantor of peace, despite still allowing Russian missiles to be launched against Ukraine from Belarus.

To interest the West at all without letting up repression, Lukashenko would have to bring back the neutrality clause in the country’s constitution, which he got removed during the heavily criticised referendum in February, or he would have to promise that Belarus would not be used to host Russian military units.

Today, this seems completely impossible, since it would be a giant slap in the Kremlin’s face. However, if we assess the situation as a bit more dynamic, what is politically impossible today could very well become reality tomorrow.

If Russia becomes poorer and unable to support Lukashenko’s regime to the extent it used to, then the government in Minsk, facing record-high inflation, a budget deficit it is unable to prop up, and faced with a trade blockade from Poland and the Baltic countries, might consider other options.