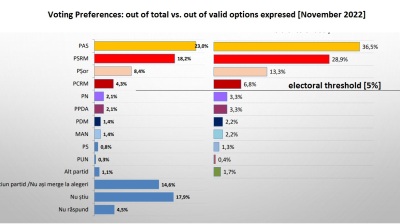 While the majority of Moldovans have shown compassion and support for the Ukrainian refugees and there are many anti-war posts on social media, the broad sentiment reflected by polls and by voters’ confidence in particular leaders remains balanced between the EU and Russia.

This is hard to explain for those not familiar with the multiple uncertainties faced by the residents of one of the poorest countries in Europe — related to the war in neighbouring Ukraine, inflation, energy supply and the prospects of EU accession — and the impact this uncertainty and frustration has on the population.

The latest poll conducted by IDIS Viitorul (The Future) think tank shows a core of nearly 40% (39.6%) of the electorate that is both pro-EU and pro-Russia. The segments that express single-sided views, namely pro-EU (27.0%) and pro-Russia (30.8%) are more or less balanced and comparatively smaller than the core segment of the undecided electorate.

However, Moldovan’s sentiment is slowly shifting towards the EU, Romania and Nato, the study also shows.

President Maia Sandu’s pro-EU Party of Action and Solidarity (PAS) indeed leads in the electoral poll with 36.5% of the valid options expressed — but in an election it wouldn’t win an absolute majority again like it did in 2021.

Former president Igor Dodon’s Socialists (PSRM) is not far behind on 28.9%, and the electoral threshold will encourage the Communists (PCRM, 6.8%) to join the Socialists and close the gap with the PAS. The party of fugitive businessman Ilan Shor (the Sor/Shor Party, 13.3%) would play a key role.

Sandu is rated by the poll as the third most credible politician in Moldova (35.7% positive and very positive views), after Dodon (40.4%) and Dodon’s former partner, the mayor of Chisinau Ion Ceban (37.1%).

Shor, the visible beneficiary of the $1bn bank frauds as identified by Kroll report on the massive financial fraud scandal, is seen as more credible than the country’s PM Natalia Gavrilita (27.8% versus 24.6%), even though a warrant of arrest was issued on his name.

While it managed to secure EU candidate status for Moldova, the PAS is in power at a time of great uncertainty.

EU accession is a remote and uncertain scenario for Moldova, while the energy prices have quadrupled this year and no immediate improvement is expected next year. Inflation exceeded 30% y/y and new electricity price hikes are expected.

With no energy resources, the poverty rate will remain high in the country and the end of the war in Ukraine — expected to lead to a resumption of the foreign investments in Moldova as well — is not expected within a predictable time horizon. Even when foreign investments resume, they will lead in the first stage (to last for a decade or so) mostly low-paid jobs, as the experience of Romania demonstrated.

On the other hand, pro-Romanian and pro-Nato sentiments are rising, though they remain below the 50% tilting point, particularly as regards the country’s Nato’s membership.

Notably, IDIS Viitorul did not ask voters a question about their support for Moldova’s EU membership. The outcome, based on an extrapolation of the other questions included in the poll, is not obvious.

Sandu said once that talks about unification with Romania should begin only after a critical mass of voters supports such a move.

IDIS Viitorul is founded and conducted by Igor Munteanu (who recently set up a pro-EU party) and has the economist Veaceslav Ionita among its prominent members. Munteanu was elected member of the parliament of Moldova in the 2019 parliamentary election, running as an independent on the ticket of the alliance formed by the now ruling PAS with Andrei Nastase’s Dignity and Truth Party (PPDA).