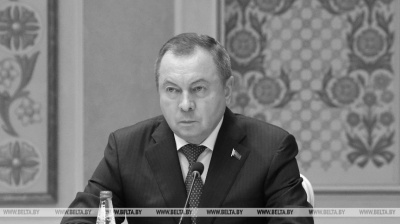 Belarus' foreign minister Vladimir Makei and one of the longest serving of Lukashenko's ministers died suddenly at the weekend / https://eng.belta.by/
By bne IntelliNews November 28, 2022

On Saturday, November 26, Belarusian state media reported that Belarusian Foreign Minister Vladimir Makei had died suddenly at the age of 64. No official explanation was given for the cause of death, and speculations abound among foreign policy analysts as to what could have caused it.

Makei appeared to be in perfect health right before his death. Only a couple of days before he had been to the CSTO meeting in Yerevan, and the day before his death he met with the Vatican’s representative to Belarus, Ante Jozic. The news of his death was also considerably toned down, ending up on the same spot as the weather report on Belarusian state news service BelTA’s website on Saturday. News that Lukashenko had officially given his condolences to Makei’s family appeared only on Monday, nearly two days after his death.

Probably the most reasonable explanation so far has been given by the independent Belarusian newspaper Nasha Niva. Citing its own sources, Nasha Niva claimed that Makei had died of a heart attack and that the doctors were not contacted in time.

However, there’s also been several suggestions that Russian intelligence services may have been behind his death.

Since Russia began its full-scale invasion of Ukraine on February 24, the importance of Belarus’ defence ministry, its KGB intelligence service and various economic ministries that manage the sanction’s fallout has increased. As Belarus has been pulled firmly into Russian arms and its diplomatic relationship with the West has been destroyed, there’s been little use for the foreign ministry, since there’s nothing it can do to convince the West to drop sanctions.

Ukrainian and Western intelligence services have often reported that Putin has been putting pressure on Lukashenko to join the war by putting boots on the ground in Ukraine. However, Lukashenko has refused, due to what many believe to be domestic political calculations. Neither ordinary Belarusians nor the Belarusian army wants to go to war, and joining the war could mean political suicide for Lukashenko.

Makei was one of Lukashenko’s closest men. He was the only top-tier minister to remain in office after 2020, while the Prime Minister, Minister of Defence, Minister of Interior and Prosecutor General were all replaced.

Makei began his career in the Soviet Military Intelligence Service in 1980, where he reached the rank of colonel; during the 1990s he held various positions around Belarus’ ministries and embassies. Between 2000-2008 he was Lukashenko’s aide, between 2008-2012 he was the head of Belarus’ President Administration and between 2012-2022 he was the Minister of Foreign Affairs.

During his 10 years as Foreign Minister, Makei invented Belarus’ “multi-vector foreign policy”, which neatly balanced Belarus between Western, Russian and other countries’ political and economic interests. Especially after 2014, Makei was the face of Belarus’ rapprochement with the West and neutral positioning in the Russian-Ukrainian conflict. He could often be seen wearing traditional Belarusian clothing and could sometimes switch to Belarusian during closed receptions, which made many consider him as a liberalising driving force for Belarus.

During the Belarusian anti-government protests in 2020, many looked up to Makei, believing that perhaps he would defect to the opposition, triggering a split within the political elite. However, Makei sided firmly with Lukashenko and began accusing the West of funding and instigating uprisings against the regime. Since then, he has numerous times condemned Western officials’ statements on Belarus and supported further political integration with Russia.

This made it clear that Makei’s drive for a rapprochement with the West through a multi-vector balancing act was merely a method for bringing regime stability, while having no real intentions of leading to long-term liberalisation of the country.

During 2022, Makei several times attempted to convince his Western colleagues to drop sanctions by ensuring that Belarus’ military would not enter the war in Ukraine. However, his promises have not been taken seriously. Since 2020, the Belarusian regime has shown itself to be so toxic to Western governments that nobody trusts what its officials say.

With Makei's death, Belarus’ foreign ministry will likely continue to decrease in importance and without him, Belarus’ ability to initiate a dialogue with the West has been further reduced. This is a favourable development both to Belarusian and Russian intelligence services, and to the Kremlin in general.

Of course, whether or not Russia’s intelligence services had anything to do with Makei’s death is only speculation. However, regardless of their involvement, his death is bound to cause disorder in the “official Minsk” for some time and make it easier for Putin to exert pressure on Lukashenko.