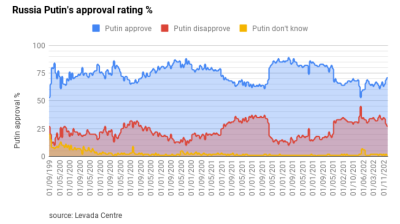 Russian President Vladimir Putin seems to have enjoyed a nationalist bump in the first months of this year. / bne IntelliNews
By bne IntelliNews March 27, 2022

Russian President Vladimir Putin’s personal popularity was boosted thanks to the rising tensions with the West to its highest level since May 2018 of 71% in February, according to most recent data from independent pollster the Levada Center.

The president’s popularity received a fillip from a surge in nationalism as tensions rose during the build up to the war that started after Russia's attack on Ukraine on February 24. Levada has yet to update its survey for March, the month when fighting began in earnest.

Putin is enjoying a similar bump that followed the annexation of Crimea in 2014. The last time Putin’s popularity was over 71 was in May 2018, where his rating was in the 80s for most of the previous four years after the annexation. That May represented the end of the extra support due to the annexation and a return to normal.

The Ukraine crisis began at the end of October after the Washington Post published a report that Russia was massing troops on the Ukraine border with the intention of invading. That was followed by two rounds of diplomacy with a meeting on January 10 in Geneva with the US and a second round of diplomacy starting with a visit to Moscow by French President Emmanuel Macron on February 8. Both rounds failed to find a compromise that resulted in the invasion of Ukraine by Russia at the end of February.

Putin’s popularity rose throughout the rising tensions, going from a low of 61% in August of 2021 to end the year at 65% and continued to climb to 71% as of February, according to Levada.

The approval of Prime Minister Mikhail Mishustin has also rising throughout the year to a high of 60% in February, its highest level since August 2020, when his popularity briefly jumped as Russia’s four-year-old recession came to an end.

The approval rating of the Russian government has also risen modestly to 53%, and its disapproval rating falling to 42%. The government’s approval rating is at its highest level since December 2015, when it was enjoying the spillover glow from the annexation of Crimea a half a year previously.

The state Duma has also enjoyed a bump to its approval, posting an approval rating of 47% in February, its highest level since April 2016, but the larger part of the population still disapprove (49%) of the Duma.

The governors remain the most popular institution after Putin, and nearly overtook him in popularity in 2020. While they are seeing their popularity growing again now, Putin’s popularity has risen faster and widened the gap between the two.

Likewise, 29% said protests with economic demands were possible and 23% of respondents said they would participate if those protests were to happen.

Serbia's population continues to decline
4 hours ago
June PMI shows Turkish manufacturing sinking further into contraction territory
1 day ago
Russia’s manufacturing PMI in the black in June as the sanction shock starts to wear off
1 day ago
Russian economy stable in May, but demand and income contraction deep
2 days ago
CEE Economic Sentiment Indicators fall on polycrisis woes
2 days ago