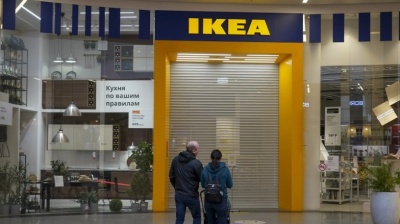 After the Belarusian regime began its spiral of political repressions in 2020, multinational firms came under pressure to divest from Belarus due to the regime’s human rights abuses. In 2021, German heavy engineering firm Siemens and Norwegian agricultural company Yara found themselves in the centre of the Belarusian opposition’s “name and shame” campaign to make companies speed up divestment.

In January 2022, Yara succumbed to criticism that it had ignored sanctions on Belarus and announced it would cease to source potash fertiliser from the Belarusian state-owned company Belaruskali.

Most recently, French media outlet Disclose published a study suggesting that Swedish furniture giant IKEA had previously received and used products made in Belarusian prisons from its Belarusian suppliers.

In Belarus, it is a common to receive forced labour as a part of your prison sentence. Disclose’s study found that IKEA’s Belarusian supplier Mogotex had purchased textiles from Belarus’ “IK-2 juvenile detention centre” in 2019. The detention centre’s director was previously sanctioned by the EU for “inhuman treatment of political prisoners.”

IKEA replied to the investigation saying that it takes “"the reports regarding Belarus very seriously and that we never accept human rights violations in our supply chain." In June 2021, Ikea stopped all new business developments in Belarus over the regime’s human rights violations. A year later, IKEA also terminated its contracts with Belarusian suppliers.

While companies can divest due to public pressure to remain true to their CSR commitments, they usually have no problem with their investments until it catches the public’s eye. IKEA had been co-operating with Belarusian state suppliers since 1999, hardly unaware of the Lukashenko regime’s human rights abuses between 1999-2020.

However, even smaller, not widely known companies, began to leave when the political repressions or international sanctions start to affect their own businesses. Since 2020, many companies (especially in the IT sphere) have left Belarus due to their employees being arrested for their participation in protests or for displays of support for the opposition. While there are countless examples of these types of arrests, a recent one is the head of the Swiss pharmaceutical company Alpen Pharma in Belarus, who was arrested on Thursday November 24.

Russia’s full-scale invasion of Ukraine on February 24, 2022, and the sanctions that followed, initiated massive exodus of foreign companies and skilled workers who decided (or were forced) to stop working in Belarus.

According to an official from the exiled Belarusian opposition, 40,000 Belarusian IT specialists have been given Polish visas in the last two years. Moreover, the president of Poland’s Investment and Trade Agency claimed around 20,000 Belarusians have received recommendations to relocate to Poland only a few months into the war.

This wave of divestments and worker exodus has scared “the official Minsk”, which needs to maintain economic control in order to preserve its political control.

In July, Belarus published a decree followed by a list of 190 Belarusian companies whose shares investors from “unfriendly countries” were prohibited from selling. The list has since been amended and the decree expanded. The November 1 amendments prohibited the reorganisation of – and withdrawal from – the previously listed 190 companies by investors from “unfriendly countries.

On November 10, it became known that the Swedish owner of Belarus’ largest network of laboratories was preparing to leave the country. The owner, Medicover Holding, was preparing to sell its shares in Synevo and Nedvizhimost Vostok and expected the sale to be finalised in Q4 2022. At the time Synevo and Nedvizhimost Vostok was not included on the list.

A day later, Lukashenko commented on investors from “unfriendly countries” attempting to exit the Belarusian market, saying that “I want them to know that nobody will sell anything with foreign capital. It will be nationalised. That’s it.” On November 17, the Belarusian government expanded its list to include also Synevo and Nedvizhimost Vostok.

Companies not restrained by this decree or from countries not considered "unfriendly" by Belarus, continue to leave or reorganise their businesses in Belarus. Last week, the Lithuanian company AB Linas Agro Group sold its 89.09% share in the Belarusian company Belfidagro. On November 22, it was revealed that Chinese telecom giant Huawei will separate its corporate divisions in Russia and Belarus from the other CIS countries, probably in an attempt to avoid possible future sanctions.

Recently, Belarusians were outraged by Mcdonald’s decision to leave Belarus and it being replaced by the Russian Mcdonald’s successor “Vkusna i tochka”. The outrage was even noticed by Lukashenko, who commented on the matter during a speech to farmers from state agri-companies saying “Good riddance” and “we know how to cut a bun in half.”

While the Belarusian government and authorities are in a way doing what they can to stop companies from divesting, their threats and their decrees that force companies to stay are not creating a welcoming investment climate. New investments from Western countries will certainly dwindle, companies that were only thinking about divesting before will definitely want to divest now, and companies unable to divest now will do it in the future.

These decisions are purely political, and have been made to punish businesses from Western countries; one could see it as a form of counter-sanctions. If there’s a buyer, the continuation of the business is secured. An investor from Russia, Belarus or another non-Western country may not run the business as well, but this decision clearly doesn’t matter to the Belarusian regime.