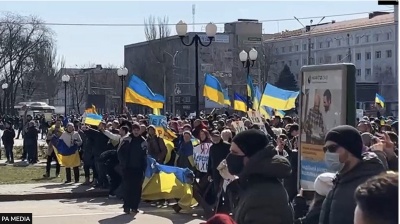 Russia captured the southern Ukrainian city of Kherson early on and relatively easily, but step by step the Ukrainian army is advancing towards the city with the intention of taking it back. / wiki
By FPRI BMB Ukraine June 30, 2022

Slowly but surely, village by village, the Ukrainian army is advancing towards Kherson. This city of more than 200,000 inhabitants was one of the first large Ukrainian cities to fall in the early days of the conflict. For four months, the region has been under Russian occupation. Or rather, survives as best it can. Resist, flee or collaborate, the Russian invasion has put the civilian population at the back of the wall. So much so that the speed of its capture by the Russian army raises questions: how is it that this strategic city, in contact with the occupied Crimea since 2014, could fall so quickly, when we see the strength with which the Ukrainian army has resisted everywhere else?

“I would like to know, like all citizens. If there was sabotage, we will know, an investigation is underway,” says Iryna Vereshchuk, Ukrainian Deputy Prime Minister for the occupied territories. No Ukrainian soldier, policeman or customs officer faced the advance of the Russian army. Only a hundred volunteers of the territorial defence, almost unarmed, opposed the arrival of the Russians. More than 60 of them died. “The Russians had prepared their invasion, not only militarily, but with agents hidden in the heart of Ukrainian power,” tells Le Monde Ukrainian MP Oleh Dunda.

Since then, Russia has been working to "Russify" this newly conquered territory at full speed. In the administration, education and daily life, Russian is becoming the only language. Anyone born after February 24 is automatically granted Russian nationality. Using the hryvnia instead of the ruble is already an act of resistance. Moscow has managed to find local people willing to co-operate in the leadership position. Thus, Volodymyr Saldo, mayor of Kherson from 2002 to 2012, accepted the appointment of the occupants to the head of the city hall. Meanwhile, Ihor Kolykhaiev, elected mayor of Kherson, has been missing since June 28. “As soon as he got out of the car, he was immediately detained by Russian armed national guards and, most likely, by the FSB,” wrote his advisor, Halyna Lyashevska, on Facebook. Since the beginning of the occupation, he could have chosen to flee the city illegally. He did not, and is nowhere to be found.

Cut off from the world, some have decided to take up arms. On June 23, a local suspected of collaborating with the Russian armies died in an explosion in his car, a report that even Russia has confirmed. Since the beginning of the occupation, Russian forces have not ventured to hold a referendum in a region that is very different from neighbouring Crimea. But they now have announced that a referendum will be held soon, most likely on September 11, according to Kyiv. Meanwhile, Zelenskiy has publicly made the recapture of Kherson a priority goal, and Ukrainian forces are progressing. Whether they will arrive in time...

COMMENT: Emerging European tightening cycle coming to an end
3 days ago
COMMENT: Does Russia have any friends left in Southeast Asia?
7 days ago
COMMENT: Will an Italian right-wing victory in upcoming elections be another win for Putin in Europe?
7 days ago
COMMENT: War as a sign of weakness: failure of reforms and of branding of a Russian nation.
14 days ago
HESS: Putin doesn’t fit with China’s plans for an alternative global financial order
15 days ago