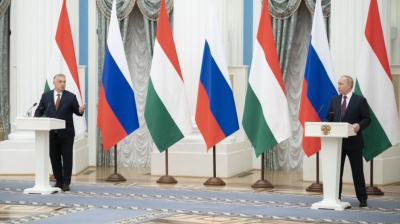 The Hungarian government says it opposes energy sanctions on Russia because of its inevitable dependence on Russian supplies because of geography and the infrastructure that had been built up under Communism. But Viktor Orban’s regime has also deepened those energy links, making Hungary ever more dependent on Moscow.

Despite Orban’s close ties with Russian dictator Vladimir Putin, Hungary has approved all sanctions against Russia, which also includes a ban on Russian coal imports into the EU. But Budapest has opposed extending sanctions to oil and gas due to the country’s high dependence on Russian energy.

Hungary’s opposition to energy sanctions has already caused a rift between Budapest and its onetime closest ally, Poland, and if Orban goes ahead and vetoes oil sanctions in Brussels this could lead him to be even more isolated and could even cause a fundamental break with the rest of the EU.

Hungary receives 85% of its gas supply and 65% of its oil supply from Russia, a reliance that he described as the “physical situation in Central Europe”.

Szijjarto said Hungary would be ready to diversify its gas supplies, if possible, citing the Black Sea offshore gas project in Romania and recalling recent developments on establishing two-way interconnectors with Hungary’s neighbours.

The Orban government is credited with the completion of strategic natural gas storage facilities with a 1.2bcm capacity in southern Hungary, as well as the recently improved links between the Hungarian and Croatian gas networks, which gives access to other market players through the LNG terminal on the island of Krk, mitigating the impact of Russian energy dependency.

"We have done a lot in order to diversify, we have built all the interconnectors with six of the seven neighbouring countries. In case there’s a new gas source being explored somewhere in the region, we would be happy to buy gas from there," Szijjarto said.

But in the meantime Hungary’s share of natural gas in primary energy consumption remains one of the highest among EU countries at 33.6% compared to the EU’s average of 24.5%, according to data from Hungary’s National Energy and Climate Protection Plan adopted in 2020.

Hungary’s dependence on Russian gas goes back to the Communist era. The Kadar regime lobbied to have direct supplies in the late 1950s as reserves in Western Hungary were close to depletion. The first Friendship pipeline (Druzhba I) was completed in 1962 and the second one 10 years later.

Government programmes to install gas in households after the fall of Communism led to a spike in consumption by retail users, from 2.1bcm in 1989 to 4.14bcm 20 years later. During the same period, domestic gas production declined 35%, which has further deepened Hungary’s reliance on Russian deliveries. Domestic output is around 1.5bcm per year, accounting for a sixth of consumption.

Hungary has relied on long-term contracts with Gazprom for its gas supplies since the 1990s, delivered through the Friendship pipelines passing through Ukraine.

A 15-year contract with the Russian gas giant was signed in October for the delivery of 4.5bcm of gas through Serbia and Austria, bypassing Ukraine, because of the constant disputes over the pipeline between Kyiv and Moscow. The contract can be reviewed after 10 years. Details of the contract were classified by the government.

Budapest also wants to increase Russian gas deliveries through Serbia by 1 bcm per year, and this issue was brought up by Orban during his visit to Moscow in early February, on the eve of Russia’s invasion of Ukraine, but no agreement was reached.

The Orban cabinet claims it receives Russian gas at a fraction of the global price, but import statistics show the contrary. The price is linked to the stock exchange quotation, with a delay of one or two months.

According to Eurostat, Hungary paid HUF394 for 1cm of gas in February. This is nearly six times the price paid by Hungarian retail customers thanks to a government price cap, and four times higher when taxes and other fees are included in the retail price.

The trend of higher gas purchase prices is likely to continue in the summer when Hungarian reserves will need to be refilled for the next heating season.

Just in February alone, state utility giant MVM, which sells directly to households, incurred a loss of HUF140bn. Economists predict that the company’s losses could be in the HUF1-1.3 trillion range this year, and these losses could further widen the already yawning budget shortfall.

The government's claims of cheap Russian gas may not hold, but even critics agree that it would be difficult to find a replacement quickly. This was one of the reasons why Hungary agreed to Russian demands to pay for gas in rubles, going along with the move by Moscow to evade Western sanctions and prop up its currency.

Hungary is less reliant on Russian oil than gas, but Moscow is still the major source of supply for MOL.

The government has set not only the retail but the wholesale price of petrol at HUF480 per litre, some 20-25% below the market price, leading to massive losses for Hungary’s leading fuel wholesaler and retailer.

MOL has recently disclosed that it would take hundreds of millions of dollars of investment and several years to switch completely from Russian oil to other types. Its Danube refinery close to Budapest is designed to process high-sulphur Russian blend crude.

Hungary is also dependent on Russia in terms of nuclear technology and fuel.  Its major source of electricity generation, the Paks nuclear power plant, is based on Russian technology and Moscow will also supply the replacement for the existing blocks, which will be decommissioned in the next 10-20 years. The four blocks at Paks with a 500Mw capacity each account for around half of Hungary's electricity generation.

Orban further cemented energy ties with Moscow when he signed an intergovernmental agreement in 2014 without parliament’s backing on the construction of two new 1,200 MW blocks at Paks (Paks 2).

State energy company Rosatom was picked for the €12.5bn project without a tender, and the investment is to be financed by a €10bn Russian loan. The project is years behind schedule and Rosatom has yet to receive the final permit for failing to meet strict EU safety regulations.

Even worse, the construction of the plant is now in jeopardy due to sanctions against Russia. Analysts say the government will eventually have to cut ties with the Russian contractor and find someone else to build the new plant.