How many foreign companies have left Russia? Strictly speaking only 300 have gone, according to a list from Yale, but including those that have suspended operations it's more like 80%. / bne IntelliNews
By Ben Aris in Berlin August 11, 2022

Three quarters (77.6%) of the 1,382 foreign companies registered in Russia are still operating, according to Vyacheslav Volodin, chairman of the parliament’s lower chamber, the State Duma, in a post on Telegram on August 9.

“In spite of the unprecedented pressure, blackmail, and sanctions, 77.6% out of the 1,382 foreign companies did not close their business in Russia,” he said.

Last week Russian President Vladimir Putin issued a decree that will ban companies from the most important sectors from leaving. The presidential decree prohibits shareholders from “unfriendly” countries from leaving the financial sector and fuel and energy companies until the end of the year. The decree will freeze the sale of Russian assets of energy companies Fortum and Enel in particular, Kommersant reports.

The sanction policy led to an increase of prices, inflation and an energy deficit, but the foreign companies are not keen to leave the Russian market as it would not only involve significant costs for them, but there are also no prospects for them to return, Volodin said.

Some confusion remains as to what is the status of many of the firms. The Yale Chief Executive Leadership Institute (Yale CELI) published a widely cited list of foreign firms' intentions and claimed that more than 1,000 are planning to leave voluntarily, but later amended its list to include five grades, including “F” for those that have no plans to leave.

According to Yale’s F grade a total of 293 from the 1,000 are still conducting business as usual. Another 158 D-graded companies have suspended investments and development, but are operating as normal. There are 171 C-graded companies that are shutting down some aspects of their business, but keeping others going.

The largest group is the B-grade where 501 companies have suspended all operations but keep the option of restarting their businesses again if things return to normal. And finally, there are 310 A-grade foreign companies that have actually closed their business and withdrawn or are in the process of selling.

Another study by the KSE Institute paints an even bleaker picture. The institute found that a total of 2,407 companies it is tracking 782 were continuing business as usual, 172 had just paused investments, 298 were scaling operations back, 716 had suspended operations, 393 say they are withdrawing from Russia, but only 46 had completed their exit. 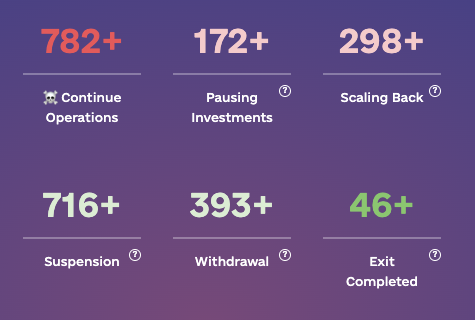 Yale CELI followed up its report on foreign companies with a study that claims Russia’s economy has come to a standstill and that the departing companies were worth a total of 40% of GDP. In a deep dive, bne IntelliNews assessed the report and concluded that the departure of the international companies will reduce the economy by 40% as most of their products and services will be taken up by local companies.

Leaving Russia has caused headaches for everyone. Russian organisation Public Consumer Initiative has sued US Nike over the non-fulfilment of guarantee liabilities to clients, Izvestiya reports. Nike decided to withdraw from the Russian market fully at the end of June.

"As an importer and a seller, Nike LLC and Nike Retail LLC are liable under the Consumer Rights Protection Law, including replacement of faulty goods with a new one of the same brand, free of charge elimination of faults of goods and return of the money paid for the goods on demand and choice of a consumer," CEO of the organisation Oleg Pavlov said in the court claim, adding that after Nike quit the Russian market, it discontinued guarantee servicing.

The first hearing of the case is scheduled for August 18 in the Cheryomushkinsky District Court of Moscow.

However, some international companies produce equipment and provide essential services that are impossible to replace, and the Kremlin has moved to prevent those from departing, especially in the energy sector.

The already announced sale of the assets of Italian energy company Enel Russia has almost been closed, but now is in limbo, as a result of Putin’s decree. The group hoped to sell its 56.43% stake to Russian oil major Lukoil and the Gazprombank-Freesia fund for €135mn - below the market price. Enel Russia has been one of Russia’s most successful power companies and a pioneer in developing green energy. It owns three state district power plants of 5.6GW and two wind farms.

The sale of the generating company Fortum that belongs to Finland’s Fortum was blocked back in July, writes Kommersant. At that time, Fortum had proposals from Gazprombank, AFK Sistema and Invest AG Alexander Abramov and Alexander Frolov, the publication claims, despite the complex structure of assets and the difficult financial condition of Fortum. The buyers even agreed to the demand to pay off Fortum's debt to the parent company for about RUB75bn ($1.1bn).

The third Western energy giant with assets in Russia is the German Uniper. The main shareholder of Uniper is also Fortum, and its Unipro in Russia has five state district power plants of 11 GW. Uniper talked about leaving Russia, but did not collect applications for Unipro assets, although top management negotiated with Gazprom Energoholding, Inter RAO and AFK Sistema, Kommersant writes.

The full list of "frozen" companies who are not allowed to sell their assets and leave Russia in accordance with Putin's decree is due to be released in the coming weeks, and it will include not only energy companies, but also banks. It was expected that the restrictions would affect the Russian subsidiaries of foreign banks that had not yet been sold, leading with Austria’s Raiffeisen and Italy’s Unicredit Bank.

Refusal by banks and energy companies to work will result in heavy fines for companies, according to the decree.

President says unrest will be dealt with “decisively”. Observers say many Iranians have lost their fear of “brutal regime”.

It's not only Belarusian exports that have been negatively affected by Western sanctions this year but the country's imports are also down to dangerously low levels. To ease the pressure Belarus is now considering a new law on parallel imports.