INTERVIEW: 'Without a free Ukraine, there is no chance for a free independent Belarus,' say hacktivists Belarusian Cyber Partisans

The Belarusian Cyber Partisans have taken on the regime of Alexander Lukashenko, / wiki
By Social media correspondent Dominic Culverwell July 9, 2022

Hours after Russia launched its full-scale invasion of Ukraine on February 24, an unexpected announcement was released online: A special hacker unit called "Tactical group of Belarus" had formed and was joining the fight against Russia.

On Twitter, they called for volunteers to join them in the resistance and announced a partnership with Ukrainian hackers. “Ukrainians and Belarusians have a common enemy – Putin, Kremlin, the imperial regime,” the spokesperson for the group Yuliana Shemetovets tweeted on February 24.

Although no one in the group expected Russia to launch a full-scale invasion, they had thought of possible responses in case the worst happened. From the first reports of a potential Russian attack, BCP prepared themselves alongside their hacktivist contemporaries in the Suprativ movement: Flying Storks, and People’s Self-Defence Brigade, which formed in May 2021.

BCP initially made headlines on January 24 after launching operation “Peklo”, Russian for 'scorching heat'. They hacked the Belarusian state railway lines, obstructing the movement of Russian troops and artillery stationed in Belarus in the leadup to the Ukraine invasion. Infecting the servers, databases and workstations of Belarusian Railway with ransomware, the group demanded two things: “The release of 50 political prisoners most in need of medical care. Preventing the presence of Russian troops on the territory of Belarus.” Speaking in an interview with bne IntelliNews, the Belarusian Cyber Partisans, via Yuliana Shemetovets, explained the reason for the January 24 attack. Although neither demand was met, the group still saw success in their action.

“The major reason for the attack was to show that Belarusians are against the presence of Russian military troops on the Belarusian territory and the potential occupation of Belarus which de-facto happened,” Shemetovets said. “Another important aspect was to show that Lukashenko is not in control of the key infrastructure and cannot be trusted by anyone, even Putin.” The latter point was emphasised even further when BCP discovered the government had been wiretapping conversations from the Russian embassy in Belarus. They released the secretly recorded conversations last month, revealing that Minsk had been spying on its closest ally.

“Even if BCP created some unpleasant conversations and the increase in distrust between Belarusian and Russian officials, BCP would consider it a successful result,” explained Shemetovets. “It looks like Putin is doing everything possible to drag Belarus into this meaningless war, and we need to show that the relationship between Belarusian and Russian officials is not that smooth.” The attacks have certainly got under the skin of Lukashenko who claimed in March that cyberweapons are “more terrifying” than nuclear weapons and require more attention.

“The clown [Lukashenko] is once again complaining that he can't do anything about our attacks,” the group posted to Telegram in response, “which means we're on the right track and continue to shake up the regime until our overall victory.” Speaking to bne, Shemetovets agreed that Lukashenko’s reaction was proof that the attacks reached their target, creating “a lot of damage for the regime”. Nevertheless, BCP realises that cyberweapons can only achieve so much in the fight against “a strong oppressive dictatorship regime”.

“People and weapons on the ground are a decisive component and without this component, Belarusians don’t have many chances to overthrow Lukashenko,” she said.

Although the war in Ukraine has hallmarks of an archaic 20th-century war, with a crazed despot invading a neighbouring country, the involvement of militant independent hacktivists is something completely new. The full impact of guerrilla cyber activists is yet to be seen.

“Cyber operations can be very successful, and in the case of Cyber Partisans, we can see how much they can achieve - from uncovering the crimes that the regime committed to disrupting the movement of Russian troops and helping find spies,” said Shemetovets. “However, physical impact operations are much more influential at the end of the day. Especially if we are talking about war conflicts (...) The technology isn’t yet there to draw all the resources from classic warfare operations.” As such, BCP has collaborated with groups on the ground, namely the “Community of Belarusian Railway Workers”. Enacting both cyberattacks and physical “rail sabotage activities on the ground”, they brought military trains carrying equipment and ammunition of Russian troops to a halt on March 6.

Moreover, BCP also communicate with Ukrainian hacktivists, forming a volunteer group called the Kastuś Kalinoŭski Regiment. Here important information is shared, such as the location of Russian or Belarusian troops.

But another hurdle lies in the lack of funding. Unlike the official armed forces, independent hackers don’t have a prodigious flow of money, limiting their capabilities.

“Hacktivists in general are not paid or supported by any state agencies (of course, if we are talking about non-state actors like BCP) and it’s hard to constantly show meaningful results,” said Shemetovets. 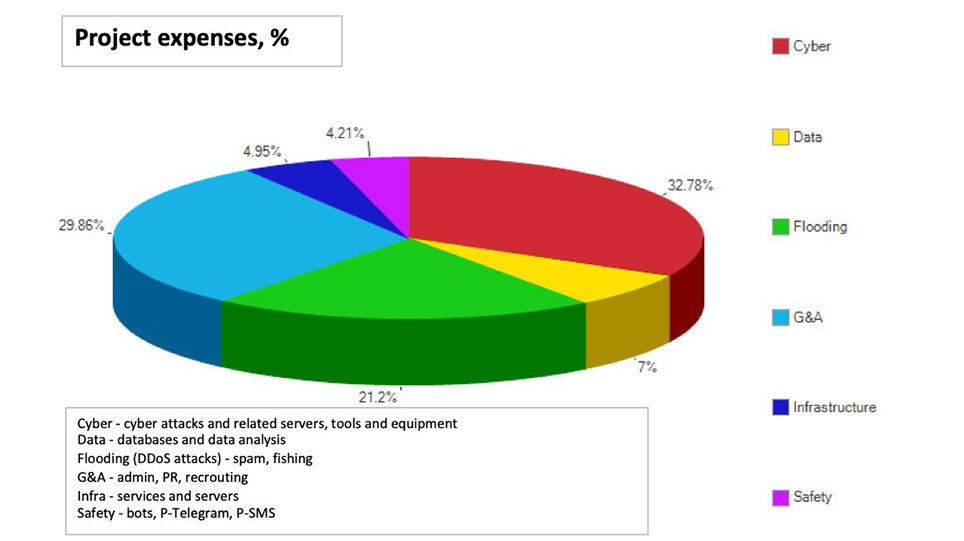 Nevertheless, their actions have inspired more and more hackers to join the Cyber Partisans, with the number of participants doubling since the start of the war. Currently around 60 people are part of the team, although members retain their anonymity. Yulia Shemetovets is the only member who has publicly released her identity.

The group all centres around their desire for an independent Belarus, politically severed from Russia, which BCP condemns as an “imperialist state”.

“Putin and his cronies don’t consider Belarusians as a nation and won’t let Belarus outside of the Russian sphere of interest,” Shemetovets explains. “We still firmly believe that Belarusians have to make a civilisation choice and come back to the European family.” This line echoes Putin’s justification for the invasion of Ukraine, emphasising just how intertwined the Belarusian and Ukrainian fight is.

“Without a free Ukraine, there is no chance for a free independent Belarus. That’s why the BCP are now doing everything possible to help Ukrainians,” she added.

Speaking on the future of Belarus and its possible direct involvement in the war, Shemetovets believes that the decision will be a costly and unpopular one for Lukashenko.

“Belarusians don’t support the involvement of Belarusian soldiers in this war, even Lukashenko’s supporters,” she claimed. “The level of preparedness of Belarusian soldiers is very low - they don’t have proper experience, knowledge, or motivation. There is a high risk they either refuse to follow the command or turn around and go against the regime and Lukashenko understands that.” Nevertheless, the Cyber Partisans will expect the unexpected and are prepared to respond should Belarusian troops be deployed.

“BCP are already helping with information on how to reach out to Belarusian soldiers and their family (...) to discourage military people from participating in this meaningless war,” Shemetovets stated.

Poland basks in the glory of being Europe’s chief ally of Kyiv
2 days ago
Russia forges ahead with gas ambitions in Uzbekistan, Kazakhstan
3 days ago
Mongolian government accused of rushing through veiled law that dismantles freedom of speech
4 days ago
Russia is preparing for spring mass mobilisation
4 days ago
Davos climate change debates hindered by lack of Russian, Chinese delegates
4 days ago